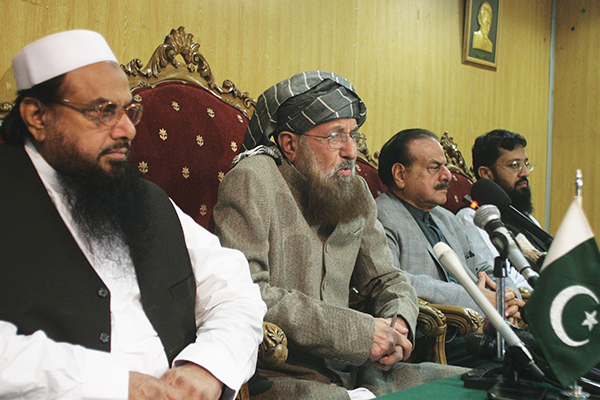 The Islamabad government has painted itself into a corner. It has taken a clear, noncomplex position on U.S. drone strikes—especially the one that claimed Hakimullah Mehsud—and threatened to cut off ties with America. Its sentiment toward Mehsud and drones is shared by most political parties (Jamaat-e-Islami has called Mehsud a martyr, others have been less effusive but sympathetic toward the slain Taliban chief nonetheless). If its actions now fail to match its white-hot rhetoric, it should batten the hatches for some stormy and destabilizing prospects. Populism will haunt the government’s every step. PTI’s Imran Khan has threatened to shut down NATO supplies through Khyber-Pakhtunkhwa province, which his PTI party rules, if Islamabad fails to stop drones by Nov. 20. And, in an ostensible bid to steel the federal government’s spine in confronting the U.S., the Defense of Pakistan Council—a coalition of over 40 political and religious parties—held a press conference on Nov. 4 to announce nationwide protests on Nov. 8. (The council includes Jamat-ud-Dawah’s Hafiz Saeed and is often accused of reading from the Pakistan Army’s alleged script.) In death, the divisive Mehsud seems to have finally brought his country’s infidel politicians on the same page.