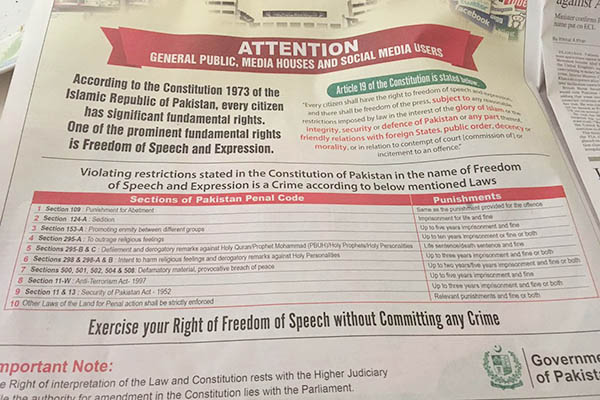 The Government of Pakistan is hoping the country’s residents will exercise their freedom of speech—with restraint.

The Government on Pakistan, over the weekend, placed advertisements in the country’s leading dailies “educating” people on how they could utilize their right to free speech without breaking any laws by committing blasphemy.

The ads, shared widely on the same social media platforms they slated, were ridiculed and derided by most users—even as they realized Islamabad’s hands were tied by a court ruling requiring the removal or blocking of all allegedly blasphemous material from social media.

On March 7, the Islamabad High Court directed the Government of Pakistan to either remove all allegedly blasphemous content from social media websites—or block them. It also directed interior minister Chaudhry Nisar Ali Khan to prosecute all alleged blasphemers and place them on the Exit Control List—orders that he pledged to execute in a subsequent press conference.

Over the weekend, the Pakistan Telecommunication Authority, the Federal Investigation Agency, and the Government of Pakistan issued separate ads urging people to report blasphemous content and informing them that freedom of speech did not permit anyone to insult religion or commit treason. The PTA ad even claims it is the “duty of all Pakistanis to spread the news.”

The GOP advertisement begins by clarifying that “according to the Constitution 1973 of the Islamic Republic of Pakistan, every citizen has significant fundamental rights. One of the prominent fundamental rights in Freedom of Speech and Expression.” It further cites Article 19 of the Constitution, which states that freedom of speech and expression, and freedom of press is “subject to any reasonable restrictions imposed by law in the interest of the glory of Islam or the integrity, security or defense of Pakistan or any part thereof, friendly relations with foreign states, public order, decency or morality, or in relation to contempt of court [commission of] or incitement to an offense.”

The advertisements also outline various restrictions to Freedom of Speech and Expression enshrined in Pakistan’s Constitution, including abetment (Section 109), sedition (Section 124-A), to outrage religious feelings (Section 295-A), defilement and derogatory remarks against the Holy Quran/Prophet Muhammad (PBUH)/Holy Prophets/Holy Personalities (Section 295-B & C), among others. Violators of Section 295-B & C can be imprisoned for life or charged with a fine.

This isn’t the first time Pakistan has taken aim at social media for blasphemous content. In 2010, Facebook, YouTube and certain blogs were blocked for participating in ‘Post Drawings of [Islam’s] Prophet Day.’ Two weeks later, they were unblocked. However, YouTube was blocked once again two years later for hosting Innocence of Muslims, a blasphemous movie that prompted riots and protests across the world. This time the ban lasted four years.

Justice Shaukat Aziz Siddiqui initiated Pakistan’s latest battle against social media. The Islamabad High Court judge heard a petition on the controversy and instructed authorities to file criminal cases against alleged blasphemers through the formation of a joint investigation team comprising Muslims “who fulfill the criteria under the law.” In the same ruling, he instructed PTA Chairman Dr. Syed Ismail Shah to submit a report outlining any precautions taken to ensure that such posts were taken down efficiently. During proceedings, the PTA had stressed that eliminating all blasphemous content was an arduous and resource-intensive task and informed the court that Facebook officials were assisting in removing such posts.

The ruling spread panic on social media, with critics claiming hackers could edit the posts of innocent users and implicate them in blasphemy cases—a prospect that can carry a death sentence in Pakistan, with vigilante mobs often targeting alleged blasphemers with impunity. To avoid this fate, many scared users on Facebook have started posting declarations of faith and loyalty to Islam and its Prophet on their timelines. The posts also state: “I will not tolerate anything regarding the Respect of Prophet Muhammad (PBUH).”

Hoping to ease people’s concerns—many outlets have started predicting that a new ban on Facebook is nigh—interior minister Khan has suggested that social media companies should assist Islamabad in tailoring local versions of Facebook, Twitter and WhatsApp to prevent “character assassination through social media.” Facebook has responded by announcing it will send a delegation to Pakistan to help resolve any concerns over ‘blasphemous and objectionable’ material. The 25 million-odd Facebook users of Pakistan are praying they’ll succeed.