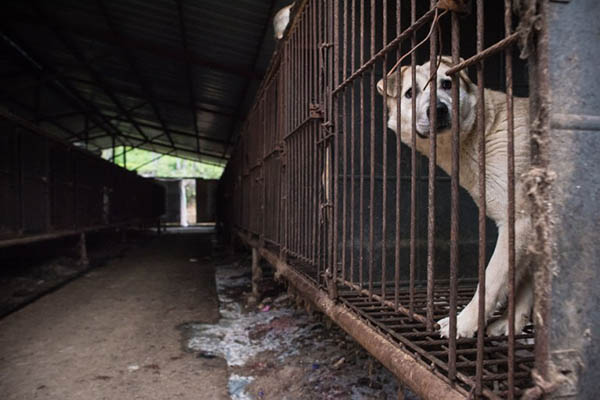 “It’s a dying business,” Gong In-Young said Wednesday as he watched U.S. activists clear out the cages of the South Korean dog meat farm he has been running for the past decade.

Close to 200 dogs, including Golden Retrievers, Siberian Huskies, Rottweilers, Japanese Tosas and Korean Jindo dogs, paced in circles inside the small wire cages, barking furiously at their rescuers. The dogs in Gong’s farm, one of thousands across the country, were bred specifically for consumption and confined in their cages from birth until slaughtered for their meat.

South Koreans are believed to consume somewhere between 1.5 million-2.5 million dogs every year, but the meat farming industry is in decline, with little demand among the younger generation.

Gong’s business is the fifth and the largest dog meat farm to be closed down by the U.S.-based Humane Society International (HSI), and Gong said he was happy to get out. “In the past, people ate dogs because there was nothing else to eat but nowadays, young people don’t have to eat it,” Gong said. “It’s becoming weird for people,” he added.

A poll conducted by Gallup Korea last year showed that only 20 percent of men in their 20s consumed dog meat in the past year, compared to half of those in their 50s and 60s. Gong also noted that the increasing popularity of dogs as domestic pets had played a large part in reducing demand for their meat.

The HSI rescued a total of 225 dogs last year, closing down four farms in what they call a “constructive and collaborative” approach to phase out an industry that has long been criticized by international animal welfare groups.

Most of the dogs are flown to the United States and Canada for adoption.

In return for shuttering his business for good, a farmer receives up to $60,000—depending on the number of dogs being bred—that can be used as seed money for a more “humane” farm, growing anything from blueberries to green peppers.

Through its well-publicized rescues, HSI seeks to raise awareness about the cruelty of dog meat farms and “initiate a conversation with South Korean policymakers,” the group’s campaign manager Andrew Plumbly said.

South Korea is preparing to host the 2018 Winter Olympics, and Plumbly said the global publicity surrounding the event provided an opportunity to push for change. “Part of the spotlight will touch on the dog meat trade so they may feel pressure in that regard and hopefully they will respond constructively,” he said.

The South Korean authorities are sensitive to the negative publicity attached to the dog meat industry, and dog restaurants in Seoul were shut down ahead of the 1988 summer Olympics.

Gong, who stumbled into the dog meat industry after many failed business attempts, admits he was “never proud” of his farm, which only ever earned him a modest living. In a normal year, he would sell around 200 animals, with an average price, depending on size, of about $200.

“I realized the dogs will become a lot happier if I changed my mind,” Gong said, while Snow, his pet Spitz, sauntered between rows of crates with dogs awaiting their departure.

Running a dog farm in South Korea requires no special license, although Gong said there were regular government checks to ensure neighbors weren’t being disturbed and dog waste was being properly disposed of. Asked to compare the living conditions of Snow and the dogs in the cages, Gong admitted: “It’s the difference between heaven and hell.”

Did the dog in the photo get rescued?