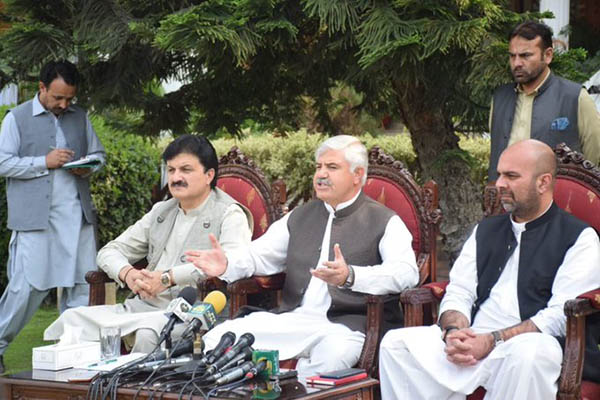 The Khyber-Pakhtunkhwa government on Wednesday announced a series of new measures designed to curb the spread of the novel coronavirus, as the number of confirmed cases in the province rose to 19.

In a meeting chaired by Khyber-Pakhtunkhwa Chief Minister Mahmood Khan, and also attended by Finance Minister Tamiur Jhagra and Adviser to the C.M. Ajmal Wazir, the lawmakers announced that all the existing restrictions were necessary to curb the spread of COVID-19 in the province. “We have closed educational institutions to stop the movement of students and make them stay in their homes,” the meeting’s participants told journalists. “We are slowly headed toward ordering closures of major shopping malls and markets,” they added.

The meeting decided that groceries and pharmacies in the province would be allowed to remain open 24/7; all other shops would open at 10 a.m. and be required to close at 7 p.m. Similarly, all restaurants have been ordered to be closed for diners until April 5; they would however still be able to offer home delivery and takeaway service.

The meeting also announced an immediate closure of all barbershops and beauty parlors for the next 15 days, and said that all private ceremonies—whether marriage or otherwise—in private homes and closed compounds had been banned to encourage social distancing and dissuade people from gathering in large groups.

The provincial government also announced new timings for government offices, saying they would be open from 10 a.m. to 4 p.m. Monday to Thursday; they would close at 12 p.m. on Friday and would remain closed on the weekends. It said all official meetings of more than 5 people had been suspended and important meetings would now be held via video-conferencing. It also said that the offices of all ministers, advisers and special assistants would remain closed during this time—except for essential roles such as that of the health minister and the adviser on information.

The Khyber-Pakhtunkhwa government has also announced that all banks have been directed to place hand sanitizers next to their ATMs so people extracting money can avoid the risk of contracting COVID-19 from the machinery; COVID-19 reportedly stays on physical surfaces for up to 3 days, making it a necessity to seek disinfectants after using public machinery such as ATMs.

The government also announced that it was vacating all tourist spots in the province, adding that the information department would inform all visiting tourists that these destinations were off-limits for the time being.

The Khyber-Pakhtunkhwa government on Wednesday confirmed that the cases within the province had risen to 19—15 from among pilgrims who had been released from quarantine in Taftan and 4 people who had recently returned from abroad. All 19, say officials, are responding well to treatment.