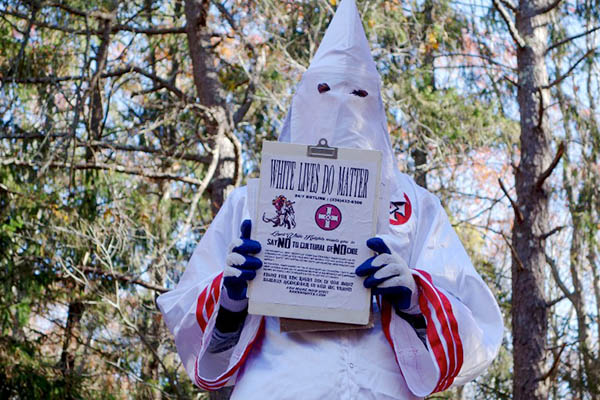 Despite racist group organizing post-election rally, observers say its support is on the wane.

In the wake of Donald Trump’s victory and the recent rise of white supremacists under the nationalist “alt-right” tag, a 150-year-old racist group has been spreading its wings: the Ku Klux Klan, which on Saturday is planning its first post-election rally.

“Our membership grows by the day,” said Gary Munker, who identifies himself as a spokesman for the group. The Klan, since its creation in 1866, has called for a white and Christian America; historically, it has resorted to lynchings and racial violence as the means to its end.

Like former KKK leader David Duke, who supported Trump’s candidacy—and was eventually disavowed by the New York billionaire—Munker says he was drawn by the Republican candidate’s language, particularly his attacks against immigrants and his talk of deporting millions.

The movement was born in the devastated states of the South in the immediate aftermath of the Civil War, just three years after President Abraham Lincoln ordered all slaves in the South to be freed. Munker, wearing one of the group’s emblematic hooded white robes, claimed that his branch of the KKK—the Loyal White Knights—has 700 members on Long Island, where he lives, and an additional 500 in the rest of New York state.

Munker, 36, who calls himself a family man, said people were beginning to “wake up” to what is happening in the country. He said that he joined the Loyal White Knights—one of 40 local or regional groups making up the Klan—five years ago after seeing his quiet and “essentially white” neighborhood change seemingly overnight with the arrival of subsidized housing units and a much more diverse population.

Munker, who was vague about his full-time profession for fear he might lose his job, is an active member of the Klan: a native of a rural part of Long Island, he regularly distributes tracts in nearby cities in an effort to draw new members. The last time he did this was on Nov. 17, in a parking lot in the village of Patchogue, which entered the dark annals of American racism after a group of high school students taunted and punched and then murdered an Ecuadoran immigrant in 2008.

The discovery of Munker’s leaflets prompted some 200 local residents to organize a rally against racism the following Sunday. Far from the killings or the burning crosses that made the Klan’s grim reputation, leafleting is now the Klan’s chief activity in 14 states and “gives them an extensive geographical reach,” said Carla Hill, an investigative researcher with the Center on Extremism of the Anti-Defamation League, the Jewish group dedicated to fighting intolerance.

The latest available data, she said, does not point to a resurgence of the movement, whatever Gary Munker might say: 74 instances of KKK leafleting have been counted so far this year, compared to 86 in 2015.

The Loyal White Knights have announced plans for a rally on Saturday in North Carolina, without confirming the exact time or place. But even if it does take place, Carla Hill said, it is unlikely to attract much more of a crowd than the Klan’s last several demonstrations, which rarely drew more than a few dozen participants.

For Mark Potok, a specialist at the Southern Poverty Law Center, which monitors extremism in the U.S., even if so-called white nationalism has undeniably gained prominence since the arrival of Barack Obama as the first black U.S. president, the movement appears unlikely to take on significant momentum. Klan membership is no more than 6,000 today, he noted, compared to 40,000 in the 1960s and several million in the 1920s.

Still, proponents of white superiority feel that Trump’s election has given them “a political space to present their views as legitimate,” Potok said, adding that “they have not been taken that seriously in 50 years.”

Thus, a conference on Nov. 20 in the federally owned Ronald Reagan Building in Washington gathered some 250 white supremacists, some of whom raised their arms in a Nazi-like salute to their far-right leader Richard Spencer—and to Trump’s victory. But these “intellectual” extremists, who refer to their movement as the “alt-right,” “look down on the Klan,” Potok said.

For the Klan, with its dark history of violence, “can’t make the claim like Richard Spencer that ‘we are standing up for the rights of white people [but] we don’t hate anybody,’” said Potok.

But Munker said he mistrusts the smooth talkers of the alt-right: “We are Christians [while] they let anybody in—and just that makes me wonder about their integrity,” he said.