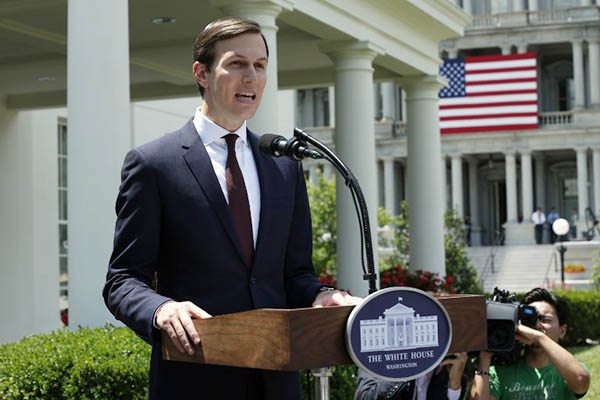 “Let me be very clear—I did not collude with Russia, nor do I know of anyone else in the campaign who did so,” Kushner said after he testified before a congressional inquiry. The normally camera-shy presidential aide said contacts with then Russian ambassador Sergey Kislyak, a Russian financier and a Russian lawyer—who offered dirt on his father-in-law’s campaign rival Hillary Clinton—were all above board. “The record and documents I have voluntarily provided will show that all of my actions were proper and occurred in the normal course of events of a very unique campaign.”

Kushner spent more than two hours on Monday appearing before Senate investigators probing Russian meddling in the 2016 election. Both houses of Congress and the Justice Department are investigating whether Trump campaign officials colluded in that effort—which the CIA says was approved by President Vladimir Putin.

The sprawling probe has plagued and infuriated the White House since Trump took office, with many influential members of his team having failed to report their contacts with Russian officials. Speaking on his return to the White House—where he is a senior adviser to the president—Kushner said he has not “relied” on Russian funds for his business.

He also went on the offensive, echoing Trump’s claim that the investigations are an effort by Democrats to explain away a shock election loss. “Donald Trump had a better message and ran a smarter campaign, and that is why he won,” said Kushner, a former campaign aide.

The statement was the first time the reticent Kushner—who is married to Trump’s eldest daughter Ivanka—publicly explained his contacts with Russian officials. Kushner is scheduled to appear before a House panel on Tuesday.

Special counsel and former FBI director Robert Mueller is leading a broad investigation into possible collusion. The House and Senate, however, have organized separate probes.

The 36-year-old Kushner has faced scrutiny for not disclosing meetings and for taking part in talks with Kremlin-connected Russians along with Trump’s son Donald Jr. In an 11-page written statement, Kushner dismissed the June 2016 meeting with Russian lawyer Natalia Veselnitskaya, which Donald Jr. had taken hoping to get incriminating information on Trump’s rival Hillary Clinton, as a “waste of time.”

During the meeting, he recalled emailing an assistant: “Can u pls call me on my cell? Need excuse to get out of meeting.”

Kushner also acknowledged a brief meeting with Kislyak in April 2016—when Trump himself also briefly met the ambassador—and another during his father-in-law’s transition. That second meeting was also attended by Michael Flynn, who became Trump’s national security adviser but was quickly ousted over his contacts with the Russian ambassador.

“I stated our desire for a fresh start in relations,” Kushner said of the sit-down, saying he asked Kislyak who had direct lines to Russian President Vladimir Putin and was open for dialogue. “The fact that I was asking about ways to start a dialogue after Election Day should of course be viewed as strong evidence that I was not aware of one that existed before Election Day.”

Kushner emphasized that he “did not suggest an ongoing secret form of communication for then or for when the administration took office.” He said Kislyak recommended meeting with banker Sergey Gorkov—“someone with a direct line to the Russian President who could give insight into how Putin was viewing the new administration and best ways to work together.”

Kushner said there was no mention of sanctions in his talks with both Kislyak and Gorkov.

The topic has made recent headlines as Congress prepares to approve fresh punitive measures against Moscow. The Senate overwhelmingly passed new sanctions in mid-June, and after reaching an agreement, the House is due to vote Tuesday on a bill targeting Russia over the suspected campaign meddling as well as its 2014 annexation of Crimea from Ukraine.

Democrat Ron Wyden, a member of the committee that questioned Kushner, said his statement raised “far more questions than it answers” and should not be merely accepted as “the whole truth.”

“Kushner has repeatedly concealed information about his personal finances and meetings with foreign officials,” said Wyden.

President Trump watched his son-in-law and believed he “did a good job,” according to White House spokeswoman Sarah Huckabee Sanders. Donald Trump Jr. and Paul Manafort, Trump’s former campaign director, are currently negotiating with the Senate Judiciary Committee about when they will appear to give their version of events.