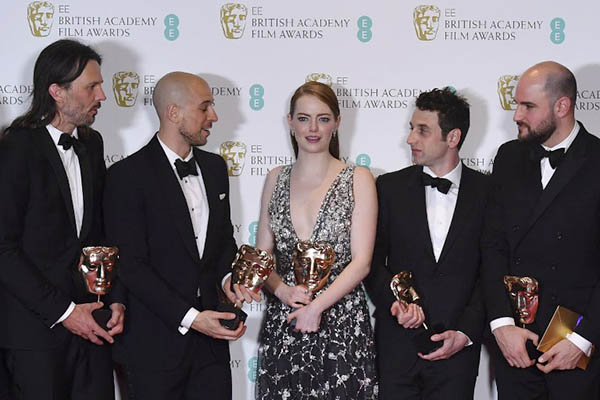 The dreamy tribute to the heyday of Hollywood musicals was named best film, while also picking up gongs for cinematography and original music, in the ceremony at London’s Royal Albert Hall. Accepting the award for best director—beating off competition from the likes of Ken Loach and Tom Ford—Damien Chazelle said it was an “incredible honor” and a pleasure to be there along with those behind the film.

Leading actress Emma Stone, who plays an aspiring actress in La La Land, took on a political tone in her acceptance speech. “In a time that is so divisive I think it’s really special we were all able to come together tonight, thanks to Bafta, and to celebrate the positive,” she said.

A throwback to Hollywood’s Golden Age, La La Land took home seven Golden Globes in January and has been nominated for 14 Oscars. The best actor Bafta award went to Casey Affleck, for his role in the drama Manchester By The Sea, beating Ryan Gosling who was nominated for La La Land.

Flying the flag for U.K. filmmaking was Ken Loach’s I, Daniel Blake, which won the outstanding British film but lost out in four other categories. Set in Newcastle, northeast England, the film tells of one man’s battle against the bureaucracy of Britain’s social welfare system.

Accepting the award for outstanding British film, 80-year-old Loach said filmmakers stand “with the people” and took aim at the government. “The most vulnerable and poorest are treated by the government with a callous brutality that is disgraceful,” he said.

Ahead of the awards ceremony, he urged the public to become active in politics. “You should know which side you’re on and why and get in and take part in politics. There is no time now to sit on the fence,” he told AFP.

A complete list of winners from the British Academy of Film and Television Arts:

Film not in the English language: Son Of Saul

Production design: Stuart Craig, Anna Pinnock (Fantastic Beasts And Where To Find Them)