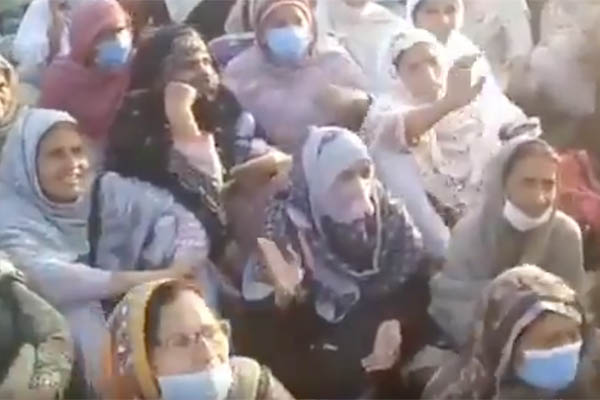 Lady health workers, staging a sit-in in the heart of the federal capital since Oct. 14, clashed with police on Monday, as they attempted to march toward Parliament to continue demanding higher salaries and a formal service structure.

Hundreds of women, all members of the lady health workers that do the unenviable job of administering polio vaccines to reluctant—at times abusive—citizens, and were also on the frontlines of the government’s COVID-19 response, have been demanding their rights in a prolonged sit-in that has yet to show any sign of conclusion.

Gathered at Islamabad’s D-Chowk, the women have been dealing with shortage of food and drinking water, a prolonged sit-in that is exposed to the elements at the onset of winter, and complete darkness at night when streetlights are often turned off to discourage them. Over the past six days, the protesters say, they have met government representatives five times but have not seen their issues resolved despite multiple promises that they are being heard.

Special Assistant to the P.M. on Health Dr. Faisal Sultan, last week, told media that provincial governments, and not the center, could resolve the problems facing the workers. He claimed he would arrange a meeting with Punjab Health Minister Dr. Yasmin Rashid but was told that she had already let down the protestors and they would not settle for anyone less than Punjab Chief Minister Usman Buzdar.

“A service structure and creation of service rules, and an increase in salaries, are our main demands which should be met immediately,” National Program Health Employees Federation President Rukhsana Anwar has told local media about the protesters’ demands.

Anwar has said that most of the lady health workers are being paid between Rs. 20,000-22,000—the exception is LHWs from Sindh who are paid Rs. 20,000 and have been granted an additional Rs. 17,000 as COVID allowance. She said the government had, over the weekend, told them their demands would be met but had yet to issue any notification verifying this. Most of the protesters left after that meeting, expecting confirmation shortly she said, but nothing had been officially conveyed, and Monday’s protest was reassertion of their demands.

According to daily Dawn, Anwar has claimed that the protesters have been threatened with departmental action if they do not call off the sit-in. Others have claimed that local restaurants have been told to not sell them any food by the district administration, making their protest even tougher.

The lady health workers were among tens of thousands of government employees who gathered in Islamabad on Oct. 14 to protest inflation, low salaries, and lack of service structure. While the other protesters left after a short demonstration, the LHWs have remained to exert pressure on the government.

On Sunday, the lady health workers announced that they would march toward Parliament House on Monday. In the morning, they fulfilled this promise by marching on Parliament. The protesters condemned the government for halting the Islamabad Metro Bus Service to prevent their supporters from joining them. The march toward Parliament, meanwhile, resulted in police attacking the LHWs and injuring at least two women.

In footage of the clash, women can be heard criticizing the police response, with one praying to God to “punish these people for attacking peaceful women.” The organizers have vowed that they will attempt the march once more once more of their colleagues have joined them from other parts of the country. Despite this clash in the heart of the federal capital, Prime Minister Imran Khan has yet to issue any statement on the sit-in, appearing to be far more concerned about the united opposition’s ongoing movement to oust his government.

PMLN’s Senator Ayesha Raza Farooq has submitted a calling-attention notice for the protest to “draw attention of the minister toward the protesting lady health workers who need to be heard.” In a posting on Twitter, she added: “Lady health workers; our heroes, our foot soldiers.” Meanwhile, PPP leader Shazia Marria stepped in to provide the protesters with food and water over the weekend after hearing reports they were being denied service at local outlets.

Government spokesman Shahbaz Gill, meanwhile, has sought to dismiss the protest as one of “hired people” and implied that the opposition is instigating it.