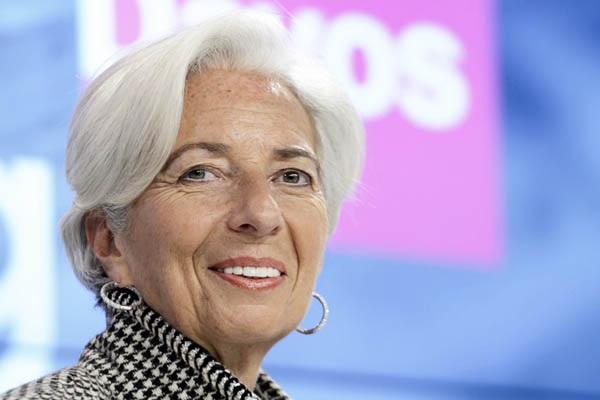 Executive board of the international organization says there are no other contenders for the job.

Christine Lagarde, the first woman to head the International Monetary Fund, became assured Thursday of a second term as managing director to steer it through a global economic slowdown. The executive board of the global crisis lender announced that there were no challengers facing Lagarde, for the five-year term that begins in July.

There was little question that the race would be uncontested after Lagarde, 60, said she was running for a second mandate on Jan. 22, a day after the nominations period opened. It closed at midnight Wednesday.

The former French finance minister received a flood of support worldwide, from across Europe, including France, Germany and Britain; China; Latin America; Canada; and the United States, the IMF’s largest shareholder.

On Thursday, Treasury Secretary Jacob Lew formally announced U.S. support and praised her “exceptional job” in leading the IMF over the last five years “at a critical time for the global economy.” The chorus of support likely discouraged anyone else from applying.

The board, representing the IMF’s 188-member nations, said it would hold meetings with Lagarde and wants to complete the selection process “as soon as possible” and on the basis of consensus. Its decision is expected by early March.

Unless there is a sudden, unexpected event, the outcome of the meeting is certain.

In 2011, Lagarde competed with Mexico’s central bank governor, Agustin Carstens, to succeed Dominique Strauss-Kahn, who resigned in disgrace over a sex scandal. She enjoyed widespread support, including from emerging-market and developing countries.

The IMF’s top job has been held by a European since the institution was created in 1944. The presidency of its sibling institution, the World Bank, traditionally goes to an American.

Looming over Lagarde’s selection for a second term is a legal hurdle: her role in a French banking scandal that predates her arrival at the IMF. In December, judges ordered her to stand trial in the long-running affair of former Adidas boss Bernard Tapie, who received a large state payout for his dispute with a state bank during her time as finance minister.

Lagarde is fighting the trial order, insisting that she “acted in the interest of the state, conforming to the law.”

“I hope that the justice authorities, at the end of the procedure—as long and painful as it is—will agree,” she said in December. The IMF board at the time reiterated its confidence in her. Her re-election would come after having pushed through the 2010 IMF governance reforms that finally took effect in late January after the U.S. Congress lifted its objection.

The reforms made China the IMF’s third-largest shareholder and increased the voting rights for certain other emerging-market economies. Her second term is likely to be dominated by concerns about the global economy, related to the Chinese slowdown and falling oil and other commodity prices that are hammering other emerging-market and developing economies. And she probably will continue to oversee two European crises that have preoccupied the IMF in recent years.

The IMF is expected to decide soon whether to participate in the European Union’s financial rescue of Greece, the highly indebted Eurozone country that it has aided twice since 2010 but remains in a deep economic crisis. It also is due to decide whether to continue a massive bailout for cash-strapped Ukraine, after Lagarde threatened Ukrainian authorities Wednesday with pulling the plug if they do not step up the battle against corruption.