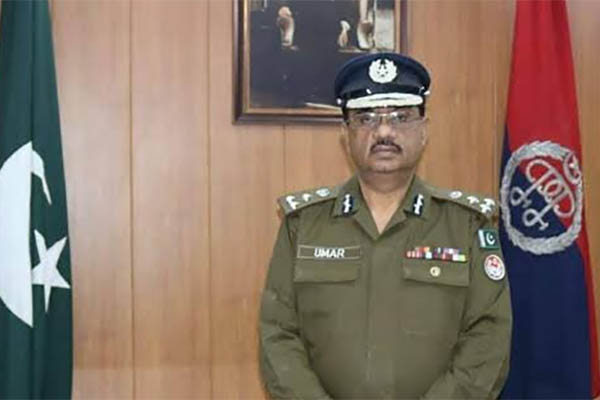 Over two weeks after incident on Lahore-Sialkot Motorway, Umar Sheikh claims police could have been on time if victim had called helpline

Lahore Capital City Police Officer (CCPO) Umar Sheikh on Monday appeared to prove his “apologies” have been nothing more than empty words to appease critics by once again appearing to blame a woman for being gang-raped on the Lahore-Sialkot motorway.

Earlier this month, a woman traveling from Lahore to Gujranawala via the motorway was gang-raped in front of her children after her car ran out of fuel late at night. The brutal crime has provoked mass outrage and calls for harsher punishments for the culprits. During this time, Sheikh has repeatedly appeared to cast blame on the victim for the crime before offering mealy-mouthed apologies amid calls for his ouster from the public.

On Monday, Sheikh was summoned to the Senate committee to provide a briefing on progress into the case—one of the rapists has been taken into custody but the primary accused remains at-large despite more than two weeks having passed since the incident. During his briefing, he claimed that “in his view” the victim had “traveled late at night without her husband’s permission.” The panel, rightly, berated him for this toxic mindset where women are entirely beholden to the men in their lives and demanded he stick to his job and state the facts, not offer his “personal opinions.”

On the back-foot, Sheikh then claimed he “had been told that the victim left late at night because she wanted to talk to her husband via video-call from home.” The Senate told him that it was irrelevant why or how the woman was traveling that night, adding that it was his job to ensure security, not question someone’s private life.

The CCPO told the committee that police had identified the culprits within 72 hours through geofencing, DNA testing, fingerprints and other tracking technology. He said that one of the suspects, Shafqat Ali alias Bagga, was under arrest while the main suspect ‘Babar Malik’ was absconding. Committee member Ainee Marri pointed out the main suspect’s name was Abid Ali and questioned how the lead investigator couldn’t even get this simple fact right.

Sheikh, in a repeat performance, apologized claiming he was an old man and did not have a great memory—raising further concerns over how someone who can’t even remember the name of Pakistan’s “most wanted” criminal can be expected to manage security for the country’s second-largest city.

According to Sheikh, if the victim had called helpline 15, police would have arrived in time to protect her. He claimed the police team had reached the scene within 28 minutes of receiving a call. The committee noted that in a previous meeting they were informed the police had arrived on the scene in six minutes and questioned the “contradictory” statements. “Even the U.S.’ police cannot reach the site in six minutes, how can we?” Sheikh said, perhaps forgetting in his doddering age that he had earlier blamed the victim for thinking she was in France—not the U.S.

In a clear case of Sheikh’s belief he is untouchable—as Prime Minister Imran Khan has reportedly backed him at every step in seeming confirmation the government is hand-in-glove with his mindset—the CCPO then apologized again and asked a joint session of Parliament so he could “apologize” to all lawmakers at the same time and not have to repeat his apologies to each individual.

It should not need to be said that a police officer has no authority—in any capacity—to even request a joint session of Parliament, much less actually demand it of senators.

Predictably, the incumbent Pakistan Tehreek-e-Insaf-led government has not had anything to say about the CCPO’s latest faux pas. The government machinery has all lined up in his support and continues to defend him, reportedly with the full backing of the prime minister. For women of Lahore, and Pakistan as a whole, the question they have struggled with for the past month remains unchanged: can they possibly feel safe knowing the man tasked with their security will blame them for reporting crimes?