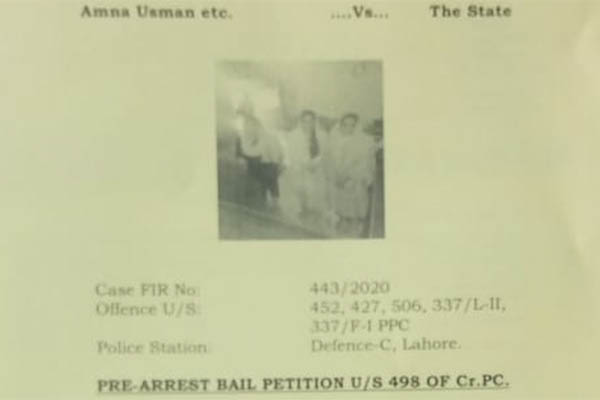 Amna Usman, Pashmina Malik, Ambreen Malik have been directed to appear in court until case filed by Uzma Khan is resolved

An Additional Sessions court in Lahore on Monday granted pre-arrest bail to Amna Usman, Pashmina Malik and Ambreen Malik over their barging into a house and allegedly torturing actor Uzma Khan and her sister, Huma Saleem.

The accused—Pashmina and Ambreen are the daughters of property tycoon Malik Riaz, while Amna is his niece—sought pre-arrest bail, as they believed their arrests “were imminent,” according to their bail orders. Judge Chaudhry Farrukh Hussain ordered them to pay surety bonds of Rs. 50,000 each, and also directed them to “join the police investigation and attend the court on each and every date of hearing till the final disposal of petition.”

Khan’s lawyer, Hassaan Niazi, praised the bail order on Twitter, saying it proved no one was above the law. “In Naya Pakistan… no one is above the law. Although police had multiple opportunities to arrest them. However, bail is the right of accused. We will contest this bail with prayers of people of Pakistan,” he said, adding that this had also proven wrong all those who were claiming Uzma Khan had resolved the issue by accepting a payout from the family of the accused.

“This bail application of Ambreen Malik and others also prove that whole nation and media made wrong allegation by accusing the sisters of taking money,” he said. “Kindly lets support the sisters till the end. We will argue this bail on June 15, 2020.”

Last week, video clips of the women allegedly torturing Khan and her sister at a house in Lahore’s Defense Housing Authority went viral on social media, with Pakistanis demanding police take action to discourage similar instances of abuse of privilege. In the videos, which have been seen by Newsweek, two or more women accompanied by armed men in security guards’ uniforms were seen storming a house and confronting actor Uzma and her sister.

The video, divided over several clips, also shows Khan—best known for the movie Jawani Phir Nahi Ani—cowering in front of the women, pleading for mercy as they urge security guards to harass her and her sister and break furniture, doors and windows.

On May 27, the actor filed an application with Lahore police seeking action against the attackers and their armed men. A subsequent First Information Report—launched after great social media pressure—nominated the three accused, as well as 15 unidentified men, for the alleged assault.

Despite the filing of the FIR, said lawyer Niazi, police remained inactive until an application was filed, on May 29, for the issuance of arrests warrants for the three accused.

During court hearings into the application, a lawyer for the police held that the accused had “gone missing” and were not responding to the investigation despite repeated summons. Judicial Magistrate Ghulam Shabbir Sial then approved the arrest warrant, noting that the suspects “have intentionally concealed themselves and are avoiding” arrest.

One of the accused, Amna Usman, has meanwhile released a clip seeking to defend herself and her cousins, claiming the case is an attempt to “malign Malik Riaz.” Riaz, in a posting on Twitter, has denied any involvement in the case.