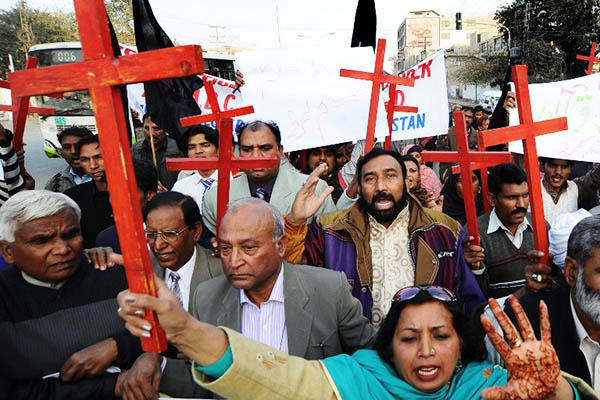 The Lahore High Court on Thursday upheld the death sentence of Aasia Bibi, a Christian woman convicted of blasphemy four years ago, as her lawyers vowed to appeal.

Bibi, a mother of five, has been on death row since November 2010 after she was found guilty of making derogatory remarks about Islam’s Prophet during an argument with a Muslim woman. “A two-judge bench of the Lahore High Court dismissed the appeal of Aasia Bibi but we will file an appeal in the Supreme Court of Pakistan,” said her lawyer Shakir Chaudhry.

Blasphemy is an extremely sensitive issue in Pakistan where 97 percent of the population is Muslim and unproven claims regularly lead to mob violence.

The blasphemy allegations against Bibi date back to June 2009. She was working in a field when she was asked to fetch water. Muslim women laborers objected, saying that as a non-Muslim she was unfit to touch their water bowl. A few days later the women went to a local cleric and put forward the blasphemy allegations.

Over a dozen religious clerics, including Qari Saleem who brought forward the initial complaint against Bibi, were present at the court Thursday. “We will soon distribute sweets among our Muslim brothers for today’s verdict, it’s a victory of Islam,” said Saleem from outside the courtroom as the clerics congratulated each other and chanted religious slogans.

Pakistan’s tough blasphemy laws have attracted criticism from rights groups, who say they are frequently misused to settle personal scores. Lawyers who defend people accused of blasphemy, as well as judges seen as lenient, also risk being accused of the crime themselves, and regularly face intimidation.

Last month a prison guard at the Adiala Jail in Rawalpindi shot and wounded a 70-year-old man with a history of mental illness who is on death row for blasphemy. The jail also houses Mumtaz Qadri, governor Taseer’s former bodyguard, who gunned him down in an Islamabad marketplace. He was given a death sentence but heralded by some as a hero for killing Taseer.

Blasphemy carries the death penalty, though Pakistan has had a de facto moratorium on civilian hangings since 2008. Only one person has been executed since then, a soldier convicted by a court martial and hanged in November 2012.

Don’t make it as war between 2 religions.Islam is a religion of peace.It doesn’t matter weather you like it not.Look at the behaviour of Christian dominated west is killing Muslims day in day out and people like you have never condemned but like it.What double standards you have?Preach peace and kill innocent Muslims every day.

Religion is to serve humanity not to kill human.

One might have some respect for this law if it was applied universally in an even handed manner. Asia Bibi’s accusers arguably were guilty of insulting Christians and their faith. Why are they not charged and tried under the provisions of the same law?
Bullies simply mob together to inflict cruelty on the defenceless misusing religion to cloak their depravity.

Law of the land is sacred and must be defended at all cost.Asia Bibi was found guilty and shouldn’t be treated as war between religion at all.Till this law is changed/ abolished must be obeyed.