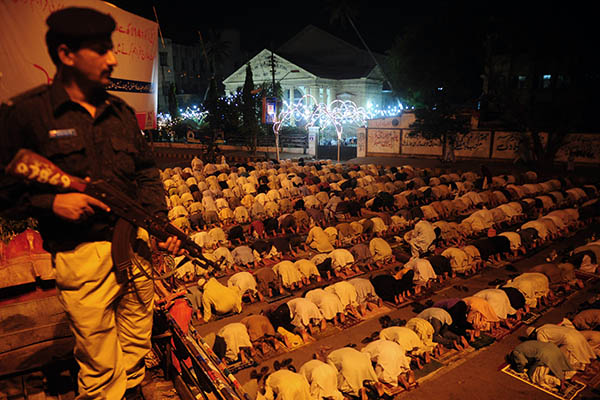 Pakistani Muslims began celebrating the holy month of Ramzan on Thursday with police on alert in Lahore and shopkeepers braced for a slump in trade after the worst bombing in the city for two years.

Five people were killed and nearly 50 wounded on Saturday in Anarkali market, which prides itself on its cuisine that is much loved during Ramzan meals at sundown. It was the worst bombing in Lahore since a teenage suicide attacker targeted a Shia Muslim religious procession on Jan. 25, 2011, killing at least nine people.

The market is back at work, but has little of the normal hustle and bustle associated with Ramzan, when families shop for food and dine out in the evenings. Instead people are scared.

“We’re definitely afraid. These blasts are intended to disrupt the peace of the city,” said Wajid Hussain, who is around 50 and runs a hotel and restaurant in the same street where the bomb went off.

Traders in Anarkali say business has fallen nearly 50 percent since the bombing. “Many people died, dozens injured, they lost their eyes, their limbs, this is the biggest act of cruelty in my mind,” said Abdul Ghafoor, 50, who sells clothes in the area. “The rush has gone down drastically. People have stopped coming to the market. Business is down almost by half.”

Lahore saw a rash of bombings in 2010, but attacks in the city of 12 million are relatively isolated compared with the business hub Karachi and Taliban-plagued parts of the northwest. Islamist militancy is a major challenge facing the new government but cross-party talks originally scheduled for Friday on how to crack down on the violence have been delayed indefinitely.

Police say they have stepped up patrols for Ramzan to protect markets and shrines, with threats on the rise in the coming weeks.

“The blast is significant in the sense that the terrorists show the world that even the peaceful and largest province in the country is not stable,” said senior Lahore officer Rai Tahir. “Three thousand police officers and men have been deployed for Ramzan duty. And an additional 2,000 are there for the markets and other security-related duties,” he added.

Security has also been stepped up at Lahore’s well-known Data Darbar shrine, where suicide bombers killed more than 40 people in July 2010. “The number of visitors at the shrine doubles in the month of Ramzan. Lots of people come in Ramzan, especially in the last 10 days of the month,” said its manager Abdul Qayum.

The provincial government in Punjab, which is headed by the Pakistan Muslim League (Nawaz)’s Shahbaz Sharif, has promised to be tough on terror. “The government is determined to tackle terrorism seriously,” said Punjab Law Minister Rana Sanaullah. “We are focusing on an improved strategy to keep an eye on local elements and facilitators who give support to such terrorists.”

But people are still determined to enjoy the month, a time for prayer and charity, as well as celebration with friends and family.

“We hope that with the kind of security they give us right now, this kind of incident will not be repeated,” said Hussain, the hotel and restaurant manager. “You know, wherever a blast occurs people start living in fear. It was thanks to God there was no incident earlier and this is the first time this has happened in a long time.”

May ALLAH ALMIGHTY keeps us all safe from harm and allow us to continue to pray like this and accept our prayers, that we may continue to walk on the right path.ameen