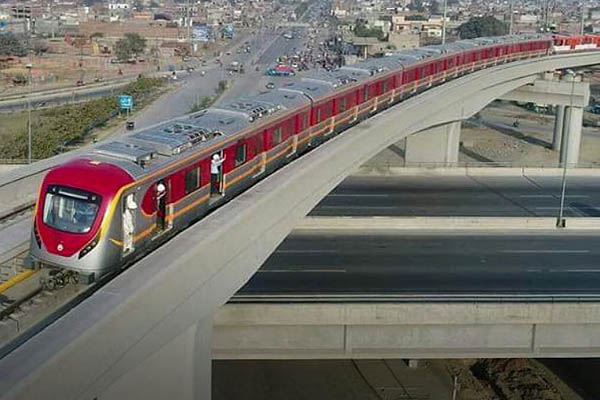 “The PTI government has set a new political tradition by successfully completing the projects of the previous government, and not letting any project fall victim to political differences,” he said at the event, adding that it was part of the China-Pakistan Economic Corridor project that symbolized Pak-China friendship, and would provide international-standard facilities for residents of Lahore.

According to Radio Pakistan, the Orange Line project comprises 26 stations and tracks spanning around 27.12 kilometers. The transit system opens to the public from today (Monday) and is designed to reduce traffic on Multan Road. The government has claimed it expects 250,000 people to travel on it daily between the hours of 7:30 a.m. and 8:30 p.m.

Customers of the train service will be charged a subsidized rate of Rs. 40 for a one-way trip, with authorities claiming that operational hours will eventually be increased to 16 hours/day. They have also stressed that all stations will be equipped with CCTV to ensure the safety of all passengers.

The project was launched by the Pakistan Muslim League (Nawaz) government in 2015—taking five years to complete against an initial estimated completion time of two-and-a-half years. One of the chief reasons for the delay in completion was multiple court cases that had secured orders for suspension of all construction activities.

While Buzdar claimed credit for “completing the work” started by the PMLN government, there were some within the incumbent government who have already branded it a “failed” project.

Special Assistant to P.M. on Political Communication Shahbaz Gill claimed that the government would have to foot a subsidy of Rs. 234/ticket, adding the Punjab government should declare a “day of mourning.”

Meanwhile, PMLN leaders Khawaja Saad Rafique and Ayaz Sadiq celebrated the completion of the project, terming it a brainchild of former Punjab chief minister Shehbaz Sharif. “The government had been thinking all along not to give credit of the Orange Line train project to Nawaz Sharif,” said Sadiq and criticized the Peshawar Metro Bus project for having to be shut down within a month of launch due to technical faults.