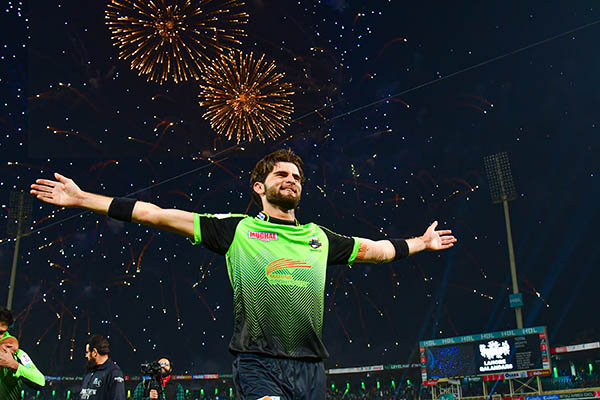 The Lahore Qalandars beat out defending champions Multan Sultans on Sunday to secure their maiden title at the Pakistan Super League at the Qaddafi Stadium in the Punjab capital.

Batting first, the “home” team set a target of 181 runs before eventually winning by 42 runs after bowling out the Sultans at 138 runs with two balls to spare. The team’s first victory in seven years coincided with captain Shaheen Shah Afridi’s first season as the franchise’s captain, with him admitting that it had been a “difficult decision” for him to agree to the captaincy.

“But I was backed by the senior players. Our team fought from the first day and till the last ball,” he told a press conference at the conclusion of the match.

What made the victory especially striking was the troubled start of the Qalandars’ batting run. In just 4.2 overs, the team had scored 25-3. Veteran batsman Mohammad Hafeez stabilized the squad, scoring 69 runs off 46 balls as part of a 54-run partnership with Kamran Ghulam. Hafeez was eventually bowled out by the Sultans’ Shahnawaz Dahani.

After the Hafeez-Ghulam team had been dismissed, Harry Brook and David Wiese took the field, scoring 43 runs in 2.4 overs. Weise, especially, hit an impressive 28 runs off just eight deliveries, helping cement the target of 181 runs.

Sultans captain Mohammad Rizwan was the first to fall after his team took up the bat, with Hafeez dismissing him after he had scored 36 runs in four overs. Fakhar Zaman followed up by running out Shan Masood and catching out Aamer Azmat when the Sultans had achieved 46 runs.

Khushdil Shah became the sixth dismissal, being bowled out by Haris Rauf, with Tim David sent back with a catch by Zaman. The last three—David Willey, Tahir Sultan, Rumman Raees—were all subsequently dismissed, with last-man Tahir being caught out by Rauf.

The match played out in front of a capacity crowd, with jubilant supporters taking to the streets after its conclusion and crowding Lahore’s major thoroughfares with scenes of revelry.

After the tournament’s conclusion, Mohammad Hafeez was presented the man-of-the-match award, while Mohammad Rizwan’s consistent performance netted him the Player of PSL 7 award.

Lahore Qalandars’ Fakhar Zaman and Shadab Khan of Islamabad United were judged the best batter and bowler, respectively, while Khushdil Shah of the Sultans was declared the All-rounder of PSL 2022, and the Fielder of PSL 2022.

Qalandars’ Zaman Khan was named the Emerging Cricketer of PSL 2022.