Lahore’s AQI Worst in the World Once Again 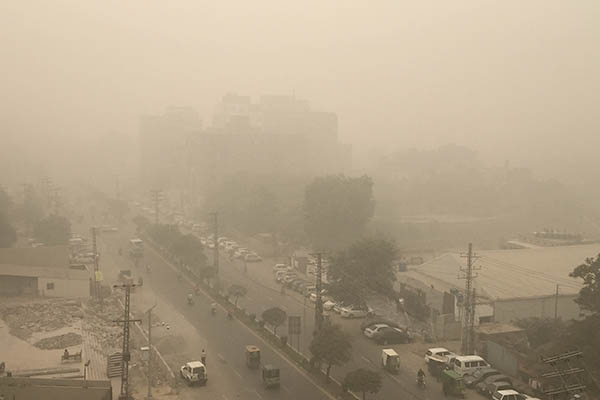 Lahore, the provincial capital of Pakistan’s Punjab province, on Thursday once more topped global rankings for the city with the worst air quality, with monitors showing an average ‘hazardous’ Air Quality Index of 335.

Residents of the capital of Pakistan’s most populous province woke up again to the sight of a haze covering their city, with residents complaining of sore throats, itchy eyes and other ailments linked to inhaling toxic material through the smog that has increasingly become a regular fixture.

While the average AQI for the entire city stood at 335 around noon, parts of the city with individual air quality monitors showed the figure rising as high as 763, which posits a PM2.5 of nearly 900 ug/m3—the equivalent of smoking nearly 40 cigarettes.

While smog is not a new phenomenon in Pakistan, it has taken on greater urgency this year amid ever worsening air quality that is particularly unhealthy for children, the elderly and the infirm. In 2007, the Lahore High Court ordered authorities to prepare a smog response action plan to overcome the health crisis. The Punjab Environment Protection Council, however, adopted a plan that utilized a modified AQI classification system, which claims a PM2.5 rating of 60 is ‘satisfactory’ even though the U.S. AQI adopted by much of the world declares it ‘unhealthy.’

PM2.5 refers to atmospheric particulate matter that has a diameter of less than 2.5 micrometers, so small that they can only be detected with an electron microscope. These fine particles, which can come from various sources including power plants, motor vehicle emissions, and agricultural burning, last longer in the air than heavier particles. This increases chances of them being inhaled by humans and animals, where they can bypass the nose and throat and penetrate deep into the lungs. The air pollution worsens during winter, emerging as smog, due to temperature inversion, which produces a layer of warm air that traps air pollutants.

Experts and observers have urged the government to adopt a more robust plan to tackle smog, including shutting down schools when the smog levels reach hazardous levels to prevent children from suffering the worst effects.

It is advised that so long as smog persists, the elderly, children and the infirm should stay indoors with the windows closed. Doctors also say people who feel the affects of smog should drink plenty of water, rinse out their eyes at least once an hour, and wear face masks if they have to travel outside.

the source of the smog is india.

The aqi in East Punjab cities is much lower than Lahore. So it’s not correct that smog is on account of burning of crop residue in Indian Punjab. This is only an excuse by incapable authorities on our side. A smoke screen for their incompetence.

Wow, Masha Allaah, Bravo for speaking the truth. While we would love to point the finger, we have only our own ignorance and material desires, to blame. The Air Quality, is equivalent to smoking two packs of cigarettes per day (CHILDREN INCLUDED). TAKE ACTION! A Lover of Pakistan, who wishes only to see Good.