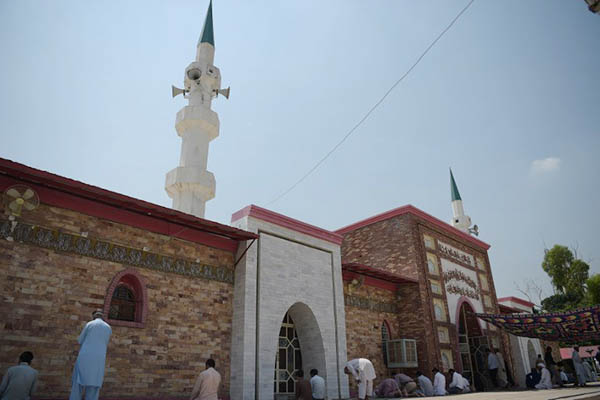 File photo of the Lal Masjid in Islamabad. Aamir Qureshi—AFP

Police in Islamabad have surrounded the flashpoint Lal Masjid once more, two weeks after former prayer leader Maulana Abdul Aziz forced his way inside the premises.

In scenes echoing the events of 2007, when the government was forced to besiege the mosque and end a standoff that lasted over a week, Aziz and female students of the Jamia Hafsa madrassa are refusing to leave the mosque unless the government reinstates him as the prayer leader.

According to local media, Aziz has said that in addition to be being restored as the prayer leader, he wants the Islamabad Capital Territory administration to allot new land for the construction of the Jamia Hafsa madrassa. Aziz claims this land would replace the parcel that had been allotted to him and his wife in 2012; the Supreme Court of Pakistan canceled that allotment last year. He also wants Rs. 250 million to “restore” the Jamia Hafsa to its pre-2007 state.

Aziz has claimed to daily Dawn that security forces are denying any food from entering the premises and has warned that a repeat of the events of 2007—when at least 150 people died—is in the offing. Senior officials in the federal capital have denied this, saying they are only preventing anyone from entering the mosque, as they do not want to risk anyone smuggling in weapons or ammunition.

The current standoff broke out on Thursday night when several dozen students of the Jamia Hafsa madrassa broke into its sealed building and barricaded themselves inside. When police tried to convince them to leave, Aziz said he would only negotiate with a minister or equally ranked official.

Part of the blame for the current situation can be laid on ICT authorities, as they failed to appoint a new prayer leader to the Lal Masjid after transferring Amir Siddique from the post two months ago. The vacuum created by his exit allowed Aziz to muscle his way in.

Hafiz Ehtesham Ahmed, who once represented Aziz and claims to be the current spokesman of the Lal Masjid’s Shuhada Foundation, claimed Aziz had been urged not to enter the mosque, as it was believed this would prompt the government to adopt a harsh stance. He claimed the instigator of the current clash was Haroon Rashid, one of the nephews of Maulana Abdul Rashid, who was killed during the 2007 siege.

This is not the first time Aziz has tried to reclaim his position as prayer leader of the Lal Masjid. Since the 2007 operation, he has repeatedly tried to enter the mosque, defying warnings from the government that this would not be tolerated.