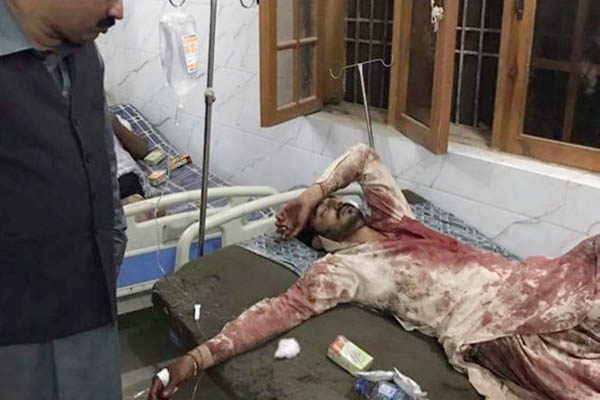 An injured devotee is treated in hospital. AFP

A bomb ripped through a crowded Sufi shrine in the town of Sehwan in Sindh province on Thursday, killing at least 70 people and wounding hundreds more, officials said, the deadliest in a series of attacks to strike Pakistan this week.

A police source said a suicide bomber entered the shrine of Lal Shahbaz Qalandar, a 13th century Muslim saint, and blew himself up among hundreds of devotees. Pakistan closed its border with Afghanistan late Thursday, citing security reasons as in past attacks Islamabad has accused Kabul of harboring Pakistani militants. Kabul also regularly points the finger at Pakistan for sending militants to carry out bombings in the war torn country. The Islamic State militant group claimed responsibility for the bombing.

Provincial health minister Sikandar Ali Mandhro said at least 70 people had died while 250 were wounded, 40 of them critically.

Images of the shrine showed blood smeared on the white floor around the grave, with debris and shoes scattered around. Survivors and local residents, many in tears, were helping the blood-soaked wounded on to stretchers, while at Sehwan’s overcrowded medical facility the injured were being treated on floors and in corridors.

An AFP photographer said shreds of flesh and blood were spattered inside the shrine. “There is blood everywhere and lots of shoes, sandals, slippers littered everywhere which indicates a stampede after the bombing,” he said.

Local resident Haq Nawaz Khan Solangi said he and his friends were sipping tea at a stall some distance from the shrine when they heard the blast but thought it could be a tyre bursting. “But soon our phones started ringing that there was a bomb blast at shrine and we rushed towards it. When we reached there, we thought that it was the judgment day as bodies were lying everywhere in the pool of blood,” Solangi said. “Some bodies had no heads, limbs or feet and those who were wounded were crying with pain and calling for help,” he said.

Emergency services are basic in Sehwan, with the nearest main hospital some 130 kilometers away. “Many wounded people are in critical condition and they will be shifted to Karachi as soon as Navy helicopters and C-130 plane reach nearest airport,” Inspector General of Police for Sindh province A.D. Khawaja told AFP.

In a statement, Prime Minister Nawaz Sharif condemned the blast and said the attack had targeted the progressive and inclusive future of Pakistan. “The Sufi people predate Pakistan’s history, and played an important part in the struggle for its formation. Any attack on them is a direct threat to [Mohammed Ali] Jinnah’s Pakistan and will be dealt as such,” he said. “The past few days have been hard, and my heart is with the victims. But we can’t let these events divide us, or scare us. We must stand united in this struggle for the Pakistani identity, and universal humanity.”

In a series of tweets, military spokesman Maj. Gen. Asif Ghafoor said the Army and paramilitary Rangers would provide medical support. Quoting Chief of Army Staff Gen. Qamar Javed Bajwa, he urged the nation to stay clam. “Your security forces shall not allow hostile powers to succeed. We stand for our nation. Each drop of nation’s blood shall be revenged, and revenged immediately. No more restraint for anyone,” he added the military chief as stating.

“To attack peaceful worshippers in one of their sacred spaces is shameful and cowardly,” U.S. ambassador David Hale said in a statement, while the European Union expressed its condolences to the victims.

Pakistanis vented their anger and grief on social media, with users calling the shrine a “capital of spirituality” and a “seat of interfaith harmony.”