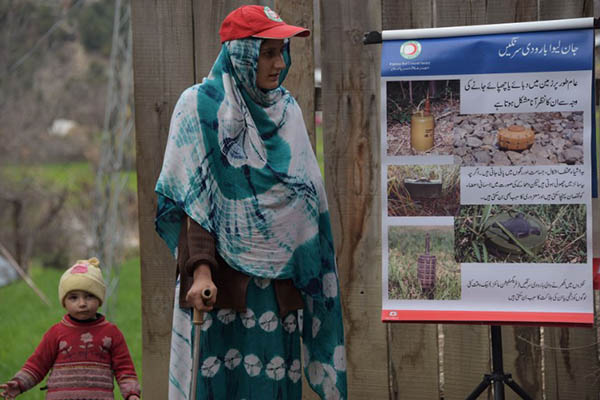 As the summer sun warms the verdant valleys of Pakistan-administered Kashmir, its snow and glaciers begin to melt, and the deadly landmines buried within them slowly begin to shift downstream towards the villages below.

Laid by troops along both sides of the highly militarized Line of Control, the de-facto border dividing the contested Himalayan region between India and Pakistan, the landmines are believed to kill and maim dozens of villagers each year.

“It is a hilly area. Our village is located at the bottom, and the enemy posts are at the top,” explains Muhammad Sulaiman, a 72-year-old resident of the village of Bugna, in the steeply sloped Neelum Valley.

When the snow melts, he says, the mines “flow from the top to our village.”

Villagers routinely ford the many small streams crisscrossing the valley as they go about their daily business. “They are hit by landmines, and they become victims,” Sulaiman says.

Nobody knows how many landmines flow into populated areas this way each year. The area is vast, and villagers do not always report what has happened.

The Pakistan Red Crescent Society does not have access to parts of the LoC itself, and says it does not have proper data. But it is enough that in winter the villagers feel safe, many told AFP, while rising temperatures bring increased nervousness.

Like Sulaiman, Salima Bibi lives in Bugna, a village of 1,500 people that has only enough electricity for lights—not heat or cooking—and is just yards from the LoC. Pakistani and Indian troops are deployed on the heights above it.

Last September she, like many other women of Bugna, was cutting grass for livestock, foraging for wood for cooking and heating, and bringing drinking water from the stream. “I was walking through a small stream,” Salima says. “All of a sudden there was a blast. I fell down on the ground, I was bleeding.”

She was rushed to the capital of Pakistan-administered Kashmir, Muzaffarabad, and remained there for two months as doctors fought to save her mangled leg. Eventually, it was amputated, the International Committee of the Red Cross (ICRC) providing her with a prosthetic.

Bibi, a mother of three clad in a traditional shalwar kameez, wrings her hands sadly as she tells AFP how difficult it is to carry out routine chores and care for her children. “I don’t want what happened to me to happen to others,” she says in an interview at her home.

So she is joining forces with the Red Crescent, which has been carrying out a landmines awareness campaign in the region since 2011. The organization has provided her with posters and pamphlets showing the different shapes of mines and other unexploded ordnance, such as mortar and artillery shells, to help villagers recognize the danger and avoid it.

The mines are often small and sometimes camouflaged, the color of stones and lying half-buried in the grass along the streams, underscoring the program’s push to educate Kashmir residents on what they look like. They are hoping to save people like Muhammad Rafiq, a carpenter from the village of Polas near the LoC, who was going to a forest to cut wood when he stepped on a mine and lost his foot. The 46-year-old now takes jobs as a day laborer to put food on the table for his five children.

“I had no difficulty when I had two real legs,” he tells AFP.

The Red Crescent volunteers are going door to door to spread the word, and say they have spoken to more than 200,000 people.

Yasir Arafat Kazmi, the program’s project manager, says they have seen a decrease in the number of victims they have been able to trace since the campaign began—from 61 in 2015 to 13 last year.

The organization has also referred some 250 victims of mine blasts to rehabilitation centers providing them with artificial limbs since 2011.

But there has been a surge of shelling along the LoC in recent months as tensions between rivals India and Pakistan rise, and the violence is hitting the campaign.

The two countries have disputed Kashmir since independence from Britain in 1947, and fought two of their three wars over the territory. Cross-border clashes recently reached the highest levels in 15 years, figures from both sides show. Earlier in June both militaries pledged to respect the ceasefire, but the vow was broken within days.

In the Neelum Valley, Kazmi of the Red Crescent warns that the shelling is preventing them from carrying out their mission of educating people about landmines. “Our field teams are not visiting the areas on the LoC as their own lives are at risk,” he says.

Meanwhile the sun beats down and the streams course through the valleys, many carrying their treacherous cargo from the militarized heights above.