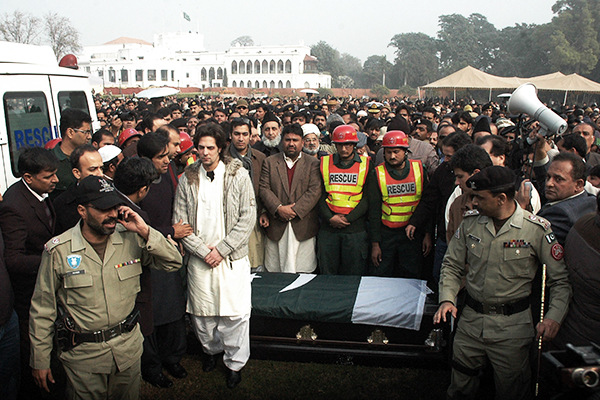 Taseer’s sacrifice is demeaned by his party’s denial.

[dropcap]I[/dropcap]t is evident to everyone except the ruling Pakistan Peoples Party that it abandoned Salmaan Taseer, governor of the Punjab, and Sherry Rehman, another voice of conscience. Taseer was assassinated in Islamabad on Jan. 4; and Rehman’s life is in danger.

Taseer was a brash, honest man with little patience for hypocrisy. After he took up the cause of Aasia Noreen, a Christian woman convicted of blasphemy, his views were wrongly and viciously misrepresented, including by some media organizations, leading to an environment of grave hostility being created against him. He never spoke against Islam. He never blasphemed. The day Taseer was buried, Chaudhry Shujaat Hussain, a former prime minister and conservative, took the same position on the laws as Taseer, Rehman, members of the Awami National Party, and cricketer-turned-politician Imran Khan: the laws must not be misused to victimize Muslims and minorities.

Scared, the “party of martyrs” declared it would not allow any amendments to the laws even after another one of its leaders joined the ranks of the martyred. Prime Minister Yousaf Raza Gilani reiterated this position at his press conference on Jan. 9 in Islamabad, the same day that at least 20,000 mullahs congregated in Karachi to condone Taseer’s murder and incite Rehman’s. Gilani also said he would welcome Maulana Fazlur Rehman, who spoke at the Karachi rally, back into the coalition fold. This is not Benazir Bhutto’s party.

What’s worse is that the PPP had no qualms in exploiting Taseer’s death by calling it a political murder and claiming it highlighted the failure, if not complicity, of the provincial government. It was not. But if it were, it was surely one in which the cowardly abandonment of a comrade did not help. Interior minister Rehman Malik alleged the assassination was part of a ploy to stoke “sectarian differences.” Trying to prove his credentials, he had earlier claimed that he, too, would shoot any blasphemer. And President Asif Ali Zardari informed his M.P.s that the party would investigate to determine whether the assassination was a conspiracy against the government under the smokescreen of religion. Despite Mumtaz Qadri having confessed to Taseer’s murder, the PPP appears unwilling to accept the religious connotations of this crime. (Qadri has said he acted alone.)

There are important questions that need to be answered. How was a man with identified extremist beliefs included in the governor’s security detail? Why did other members of the detail do nothing when even basic bodyguard training drills the concept of jumping in front of your charge to protect them? The fact remains that the assassin’s primary motivation was to kill the person he felt had committed blasphemy. Egged on by the media, which wasted no opportunity to trumpet Taseer’s alleged blasphemy, and supported by the extremist rhetoric spewed at mosques in every Pakistani neighborhood, Qadri did what was expected of him. It is true that religiosity by itself rarely leads to terrorism, but there’s no denying it is a major factor. Few have the courage to openly question this rising tide of religious extremism. Taseer was one of them and he paid the price for it.

In disavowing any religious motive for the attack, the PPP, supported by Taseer through imprisonment and exile, has got the message. Yet its shortsighted goal of playing it safe by politicizing the tragedy fails to respond to the wider problem that has finally been stripped bare: the deep-seated poison of fundamentalists who believe it is acceptable, even good, to take someone’s life in the name of religion. A small minority of religious scholars warned against, and condemned, this trend. Tahir Ashrafi, chairman of the Pakistan Ulema Council, said on Jan. 8 that those claiming there can be no debate on the blasphemy laws are misleading the nation.

No investigation will reveal the inherent problems in a society that encourages people to glorify coldblooded murder in the name of God. Taseer was killed by an extremist who believed he would be guaranteed heaven once he silenced an allegedly blasphemous voice. To blame anything other than his brave stance against the misuse of the blasphemy laws for his assassination is a disservice to Taseer’s memory, and a disservice to the nation.

Hussain is a cardiac surgeon and editor-at-large of Newsweek Pakistan. From our Jan. 17‚ 2011‚ issue.