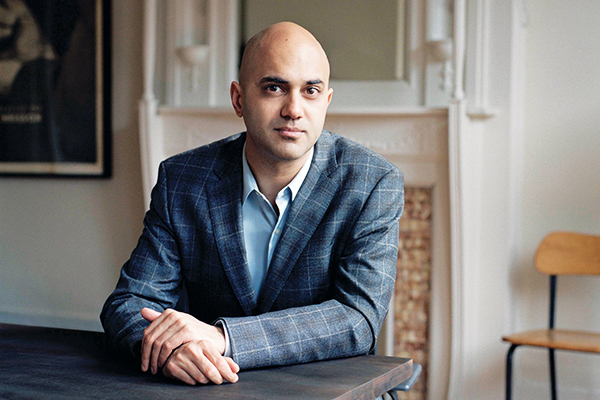 We recently spoke with Akhtar, 42, about literature, identity, and more. Excerpts:

Is it accurate to say that much of your work revolves around and addresses issues of identity?

I’m interested in the ways in which we define ourselves in relationship to the stories we choose to tell—about ourselves and our communities—and how far we’re willing to identify with those stories. Increasingly, people are taking those stories about themselves very seriously. As an artist, I work through the particular, but I’m trying to get to the universal. My assumption is that on some fundamental level, even though of course there are huge differences between us because of culture, belief, and economics, there is a commonality. That’s what I’m trying to reach. My work doesn’t have a message. I want it to be a compelling, vivid experience for a reader or a viewer. The message is for them to derive.

Do people get your work?

A lot of people do, and some people don’t. My novel, American Dervish, is about the American religious experience told from the point of view of a young Muslim boy. And it’s funny I got a ton of emails from people across many different denominations. There was a pastor in California who sent me a sermon that he was giving his congregation, inspired by things that one of the characters in the book had said about God. So you have a Christian minister who’s preaching to his congregation based on what a Muslim character is saying about her relationship with Allah. So it’s that sort of commonality that I think we all share despite the obvious differences, in this case the obvious [being] religion.

How much of your work is autobiographical?

Everything I write finds its source in something that I have seen or that I have lived. But for me to tell a good story I have to let it then take its own shape, otherwise I wouldn’t be a storyteller I would be a reporter or a nonfiction writer. I’ve been through many stages of my self-definition. I went through a stage where I identified strongly with my [parents’ Pakistani] identity. I went through a stage where I rejected many aspects of it. And I’ve come to a place where identity is something that I recognize as inevitable, but also ultimately not meaningful. It’s like clothes that you wear. And it’s ultimately not what we all share. It’s something that can be celebrated and something that can be enjoyed, but at the end of the day, like anything else, it’s not permanent.

Do you identify yourself in any measure as Pakistani?

I don’t think of myself or my life in those terms. I think if you ask me to respond to that same question as an American, I’d have an equally difficult time trying to understand what you’re really asking me. I write about the Pakistani-American community. I have another play, The Invisible Hand, which is set in Pakistan. So I’m writing about issues that are specific perhaps to a certain immigrant experience of Pakistanis, South Asians in America, but, again, my point is that I’m writing from the particular to the universal. The particulars [are not] particularly meaningful. I can celebrate them, explore them, try to understand them more deeply, but at the end of the day they’re a vehicle to expressing something more universal.

Have events like 9/11 had a bearing on your writing?

For a writer interested in trying to understand what it means to be alive now, it’s a central part of how the world has taken shape in the last 12 years. And so to that extent—I think because I’m writing about a specific community in America, and 9/11 has impacted that community significantly—it’s certainly a part of what I’m doing and it’s part of what I think about. The most important thing to me is to understand and then to try to find ways to show and share in an engaging way. So that’s where my mind is as an artist. My first book is set 20 years before 9/11, and the [upcoming] one is set 10 years after. The Boston Marathon attacks took place on April 15, and it was odd to receive news of my Pulitzer win on such a terrible day.