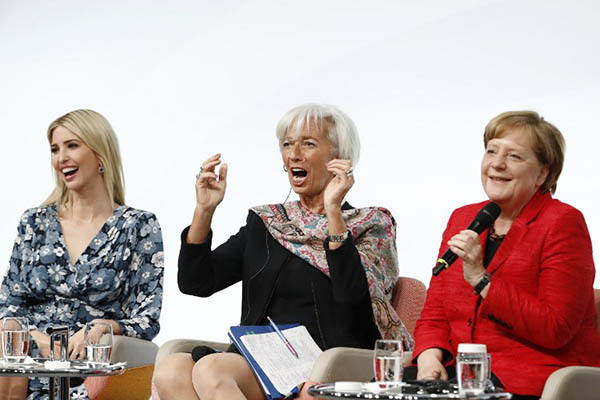 Ivanka Trump, making her overseas debut as the U.S. ‘First Daughter’ at a women’s summit in Berlin, drew groans and laughter on Tuesday as she defended her father’s attitude towards women.

Sitting on a G20 panel with female leaders including German Chancellor Angela Merkel and IMF chief Christine Lagarde, Donald Trump’s daughter caused the audience to bristle when she praised “my father’s advocacy” and his role as “a tremendous champion of supporting families and enabling them to thrive.”

The panel moderator, a finance journalist, interjected, saying: “Some attitudes toward women your father has publicly displayed… might leave one questioning whether he is such an empowerer for women.”

“I’ve certainly heard the criticism from the media and that’s been perpetuated,” replied the 35-year-old Ivanka about her father, who faced public outrage during the campaign over a 2005 video in which he was heard making degrading remarks about women. “I think the thousands of women who have worked with and for my father for decades, when he was in the private sector, are testament to his belief and solid conviction in the potential of women and their ability to do the job as well as any man.”

Ivanka, a former model who started her own fashion line, has worked for her billionaire-father’s company and now has an office in the White House. She said her father “encouraged me and enabled me to thrive.”

“I grew up in a house where there were no barriers to what I could accomplish beyond my own perseverance and my own tenacity… There was no difference for me and my brothers.”

President Trump meanwhile tweeted he was “proud” of Ivanka for “her leadership on these important issues.”

Merkel is seen to be cultivating a good relationship with Ivanka as a key communication channel with the Trump presidency, given that Berlin and Washington have differed on issues from refugees, to NATO defense spending to Germany’s trade surplus. Newsmagazine Der Spiegel saw the meeting as “a summit of the two women who are supposed to moderate Donald Trump—if that is even possible.” It said “the hopes of the free world rest on the two women because they supposedly have the power to influence the man who looks down on women.”

The Sueddeutsche Zeitung daily said that for Merkel to “have lured Ivanka is a veritable coup for the chancellor,” adding that “it would be difficult to find a more important and influential representative.” Ivanka has been accused in the United States of benefiting from nepotism, and was ridiculed on the Saturday Night Live comedy show for being “complicit” in promoting Trump’s divisive policies. Undeterred, she has spoken out on women’s empowerment, most recently in a Financial Times op-ed article co-written with World Bank president Jim Yong Kim.

They said only 55 percent of women participate in the paid labor force worldwide and called for better training, improved access to finance and legal changes.

On the panel Tuesday, however, Ivanka immediately faced a tough opening question from the moderator, Miriam Meckel, editor-in-chief of business weekly WirtschaftsWoche. Asked whether she was in Berlin to represent her father, the American people, or her business, Ivanka replied: “Certainly not the latter… I am rather unfamiliar with this role as well, it is quite new to me. It’s been a little under 100 days but it’s just been a remarkable and incredible journey. You know as an entrepreneur and as an individual prior to this, in the private sector, I care very much about empowering women in the workplace.”

A demonstration against Ivanka’s visit was scheduled outside a gala dinner on Tuesday. Kathleen Brown, of the protest group Coalition Berlin, charged that Ivanka’s clothing line is produced in “sweatshops” with mainly female garment workers in China, Vietnam and Bangladesh. “How can Ivanka Trump talk of women’s ‘empowerment’ at the same time President Trump has blocked funding for international reproductive care? Ivanka’s silence on life-and-death matters for women is deafening.”