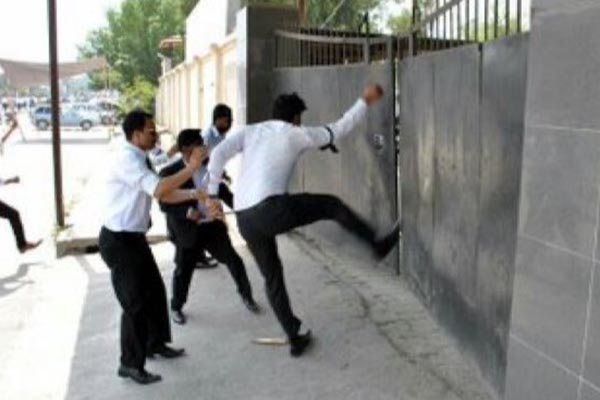 Punjab Chief Minister Usman Buzdar on Wednesday ordered an investigation into an attack by a large group of lawyers on the government-run Punjab Institute of Cardiology (PIC) in provincial capital Lahore that left at least four patients dead.

Buzdar has directed the Lahore Capital City Police Officer (CCPO) and provincial secretary of specialized health and medical education to submit a report into the situation. Prime Minister Imran Khan has also taken notice of the incident, ordering a report from the Punjab chief secretary and inspector general of police.

Grand Health Alliance Chairman Dr. Salman Haseeb said four people had died due to the actions of the rioting lawyers. The deceased were reportedly all in critical condition and were left unattended after the lawyers barged inside emergency wards.

According to local media, the lawyers were protesting against a viral video in which a doctor poked fun at lawyers who tried to force police to take him into custody for not treating one of them on a priority basis. In the video, the doctor—a member of the Young Doctors Association—narrated that a group of lawyers had gone to the inspector general of police and urged him to charge two doctors under Section 7 of the Anti-Terrorism Act, 1997. He went on to say that after the IGP refused, the lawyers had said the cop should file a case under some pretense to allow them to “save face.”

On Wednesday afternoon, a large group of lawyers started marching from Mall Road and traveled to the PIC. The protest quickly turned violent after the lawyers shuttered the entrance and exit points of the hospital and then started throwing stones and bricks at the façade. Pictures and video from the site show damaged equipment inside the hospital. The rioting lawyers also damaged cars parked in the hospital and even broke windows. The emergency ward, where patients receive critical care, was also not spared, spreading panic.

As the situation worsened, Punjab Information Minister Fayyazul Hasan Chohan reached the PIC to try to negotiate peace. The lawyers—believed to number in the hundreds—turned on the lawmaker, with footage on Geo News showing them pulling his hair, ripping his clothes and beating him with their fists. Chohan has claimed the lawyers were attempting to kidnap him and vowed to file First Information Reports against anyone found responsible for this crisis without any discrimination or favor.

Eventually, police used tear gas and batons to force the lawyers to leave the hospital. A water cannon was also deployed. While approximately a dozen or so lawyers were placed under arrest, local media reported that most of the rioting lawyers—which included women—fled into the nearby Race Course Park and have not been taken into custody. Before fleeing, however, they also set a police mobile van on fire.

Several patients and their relatives who were at PIC at the time of the siege have reported that the rioting lawyers also targeted them. One patient, interviewed by Geo News, claimed his mother had died because the doctors treating her had been forced to flee when the lawyers besieged the PIC. There are unconfirmed reports that many patients were forced to seek shelter outside the hospital after the lawyers started ripping out their IV tubes and pulling off oxygen masks.

The Young Consultants Association announced a nationwide strike after the violent riot, with the president of the organization saying no medical consultant would show up for duty across Punjab tomorrow (Thursday).

Pakistan Bar Council Vice Chairman Syed Amjad Shah told Geo News he condemned the violence but appeared to deflect blame on medical professionals. “Doctors misbehaved with the lawyers first after which the latter turned violent,” he claimed, adding the rioting was the “individual act of a few lawyers.” This claim is not supported by video footage, which shows dozens of lawyers targeting the hospital, its staff and patients with violence.

This is not the first time that the lawyers and doctors have clashed in Lahore. Last month, police registered a case against doctors and paramedics of the PIC for allegedly torturing and injuring some lawyers on the premises of the hospital. The lawyers claimed they were “tortured” for complaining about delayed treatment to a patient.

Idiots have no sense of humor. Ignorant lawyers. These are the so called guardians of law and order in the country. Shame!!

Shame on groominh and education of lawers…

Absolutely terrible lawyers are supposed to uphold the law

All these lawyers should be stoned to death right in front of the public. Sometimes I wonder why Musharraf used to hold them by their scruff, now I know why.

Sheep in a wolf clothing.

This is just the beginning……the real anarchy will be seen when students unions will be leashed on this poor country……..then teachers, Principals, VC would be dragged on the streets of Lahore………..The way all the political parties are welcoming the onslaught of student unions it seems the dice has been cast !!!

Unbelievable, just can not comprehend this. Tomorrow when they need medical attention at whose feet will they be begging? A doctors.

Such a shameful act . These lawyers should be stoned to death to set a good example .

One is forced to acquiesce in the dictum that law is created to protect the prliveleged and not the underprivileged. Lawyers UGLY face is writ large with this observation.