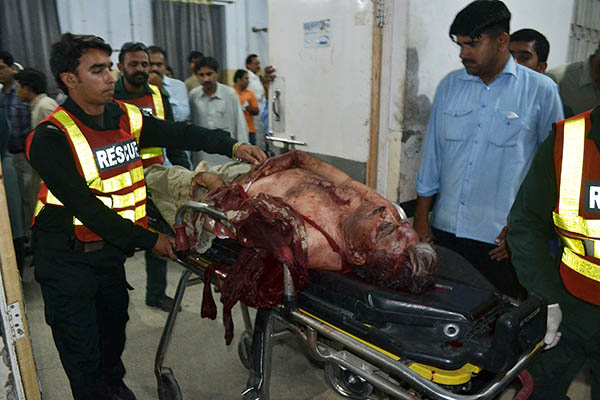 Attackers made no effort to disguise their identity and shot Rehman five times, including in his head and heart.

Lawyers went on strike Thursday to mourn a colleague shot dead for defending a university lecturer accused of blasphemy, the latest killing linked to the controversial law.

Gunmen stormed the office of Rashid Rehman in Multan on Wednesday evening and started firing indiscriminately, killing him and two others in the room. It is the latest high-profile killing linked to Pakistan’s strict laws against defaming Islam, which rights campaigners say are often used to settle personal disputes.

Police official Zulfiqar Ali said that Rehman’s attackers were young men who reached the scene on motorcycle, and made no attempt to conceal their identity using masks. Rehman, who was about 50 and married without children, was pronounced dead in hospital. He was hit by five bullets including one in the head and one in the heart, according to Doctor Ashiq Malik of the city’s Nishtar Hospital.

“We are observing a strike and no lawyer will appear in any court today to mourn and protest the killing of our colleague,” said Sher Zaman Qureshi, president of the District Bar Association Multan. “We demand that the killers of Rashid Rehman should be arrested immediately.”

He added that Rehman had told the association he had received death threats and they had asked the police to provide security, but the request was declined. “Rashid Rehman had informed us that he was being threatened by various people to stop defending the blasphemy case, otherwise he will be killed,” Qureshi said.

Rehman was representing Junaid Hafeez, a lecturer at Bahauddin Zakariya University who is accused of making derogatory remarks against Islam’s Prophet in March last year. Hafeez was known at the university for his liberal views and the blasphemy case was registered after pressure from right-wing student groups, according to a student who did not wish to be named.

An official at the independent Human Rights Commission of Pakistan (HRCP) said that for a year, no lawyer was prepared to take up the case over fears of attacks from extremist religious groups. But Rehman, who was also a rights activist and coordinator of the HRCP, decided to defend Hafeez.

During the first hearing in March this year, which took place inside a prison for security reasons, Rehman received threats from the complainant’s lawyers. “During the hearing the lawyers of the complainant told Rehman that he wouldn’t be present at the next hearing as he would not be alive,” said the HRCP in a statement issued after the incident in March. Rehman was threatened in the presence of the judge, according to the HRCP.

Allah Dad Khan, a friend of Rehman, said the lawyer had taken on hundreds of cases for the poor and needy free of charge. “He always had a smile at his face when he met people and clients and he used to be very happy when helping the needy,” said Khan. “He was never afraid of anything and when colleagues and friends asked him not to take sensitive cases he used to reply that one should not be afraid of death, one can die because of mosquito bite,” he added.

The HRCP will also hold a condolence event in Lahore on Thursday afternoon.

Did you really have to use that picture? I can’t imagine what his family is going through right now, and on top of that they have to see that horrific picture plastered all over TV screens and news stands across the country – adding insult to injury. Tactfulness, or journalistic ethics for that matter, are clearly foreign words in the Pakistani media.

Well said, Ali S.
What is the charge levied against Mr Hafeez by these right-wing student groups anyway?
Do these murderers really believe they are doing Islam a favor when committing such malicious acts? Do they not know that the Quran requires you to provide solid proof if you accuse somebody of slander? And do they not know how harsh the Quran punishes those who unjustly slander against innocent people? Did these murderers fear that the case would be dealt with justly by an impartial judge? Why do you fear a trial ???
We can only hope that these murderers will be brought to justice. And that Mr Hafeez will be given a fair trial. Islam is a religion of justice for everybody.

Pity a nation, where citizens administer justice themselves!

May Allah have mercy with Mr Rashid Rehman and give strength to his family members. Inna lillahi wa inna ilaihi raji’un. Amin.

Remove this picture, Newsweek. How about responsible journalism?

I totally agree, it was indeed shocking to see the picture. It would have been good if they showed a little more sensibility and respect to the dead and avoided using this picture. May his soul rest in peace Ameen.

Barbarians in the name of Islam. They all will face the same fate.

It is the duty of lawyers to defend citizens even those accused of horrific crimes. Without a competent defence lawyer representing the accused our justice system cannot work.
Those lawyers who honour their profession by defending vulnerable citizens accused of crimes are true heroes.
Why is the cowardly lawyer who threatened Mr Rehman still not disbarred and facing trial?