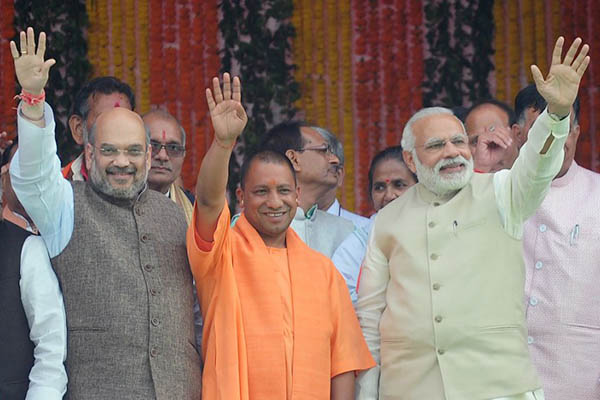 When India’s prime minister named a hardline Hindu known for his anti-Muslim speeches to head its largest state Uttar Pradesh this month, many saw it as a sign his party’s huge election win had emboldened him to pursue a more radical agenda. But in the village of Bishara in Uttar Pradesh, where a Muslim man was lynched by his Hindu neighbors in 2015 triggering a national outcry, residents celebrated into the night by letting off fireworks and dousing each other with festive colored powder.

It was a sign of the popularity of Yogi Adityanath, a 44-year-old firebrand Hindu priest known for his inflammatory rhetoric against Muslims, who make up nearly 20 percent of the northern state’s population. “He is like a god to us,” said Kiran Rana, the mother of one of the 14 men arrested over the killing of 50-year-old Mohammad Akhlaq on suspicion of killing a cow—considered by Hindus to be sacred—for its meat. “He will get them [our children] out.”

Modi has frequently sought to downplay his party’s Hindu nationalist agenda since taking power in 2014 in India, a Hindu-majority but officially secular country with a significant Muslim minority. But the appointment of a Hindu hardliner to head its most populous state has raised fears it will implement its ideology of “Hindutva” more aggressively in the future.

Hindutva, which roughly translates as “Hinduness,” aims to create a Hindu homeland free from “foreign” communities such as Muslims and Christians, whom adherents perceive as a legacy of successive invasions since the eighth century.

Manini Chatterjee, national affairs editor at The Telegraph newspaper, described it as “a kind of a declaration of war against the secular state.”

“It is saying ‘we are unapologetic about who we are’,” he said. “Their reading of the UP verdict is that UP and India in general is ready for this aggressive Hindutva.”

Bishara is only around 30 kilometers from central New Delhi, but it only has electricity from seven in the evening to the next morning. Potholes cover the village’s main road, and jobs are in short supply.

Asked what she hopes to get from the priest-turned-politician, who shaves his head and often drapes himself in a saffron-colored robe, Rana said simply, “development.” Her brother-in-law, Rajiv Rana, thought his priority should be to ensure that cows are protected.

“The cow is our mother. When we prepare food, the first bite goes to our cow. If we have to choose between the cow and development we will choose the cow,” he said.

Hindus in Bishara told AFP previous state governments had favored Muslims for electoral reasons—a perception widely used by the BJP in its election campaign for UP. They insisted relations between the two communities remained good.

Mohammad Akhtar, a Muslim carpenter who is planning to leave the village with his family for a new home in the mountains further north, said that “since the Akhlaq tragedy, there is an underlying tension in the village.”

“There is no love or affection. Some villagers won’t talk to Muslims and even children taunt us. There is a lot of intimidation. We don’t feel safe,” he said.

In one of his first pledges as state leader, Adityanath promised a crackdown on slaughterhouses, which have been traditionally run by Muslims. In the back alleys of Bishara, however, the villagers have bigger concerns.

Hindus and Muslims alike say they hope Adityanath will rule in the name of both their communities, and will focus on improving life in the region.

Modi made development the focus of his campaign in the region, a strategy that has already propelled Gujarat into pole position among Indian states in terms of economic performance. “Simply put, the economic development of the nation is a necessary condition for the political, social, military and cultural revival of Hindu civilization,” said Mint, an economic daily, last week.