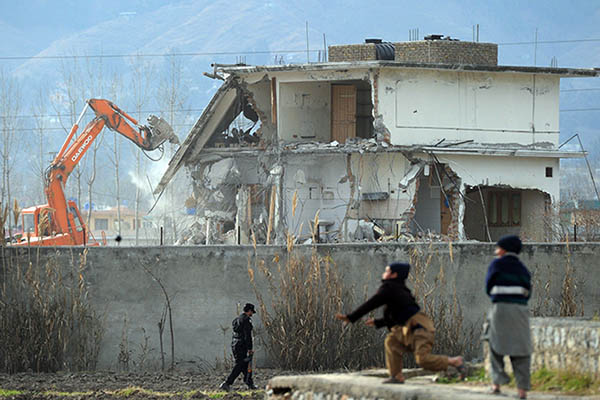 Judicial commission finds no support of complicity, urges government and military to apologize to nation for negligence, incompetence.

The report, compiled by a Pakistani judicial commission tasked with the job, also reveals new details about the U.S. raid that killed bin Laden and intriguing details about his life on the run, including that he wore a cowboy hat to evade detection by U.S. satellites.

CIA spies tracked down bin Laden to Abbottabad, where he was shot dead by U.S. Navy SEALs on May 2, 2011, during a dramatic raid near Pakistan’s premier military academy. It was one of the most humiliating episodes in Pakistan’s history and exposed the country to allegations of incompetence or collusion with Al Qaeda to hide the world’s most wanted man.

The government set up the judicial commission shortly after the raid to investigate bin Laden’s presence in Pakistan in response to Parliament’s demands of an independent inquiry.

The commission interviewed senior civilian and military officials and bin Laden’s three widows before they were deported to Saudi Arabia. But its findings were kept secret until the Al Jazeera news network published them on Monday.

“Culpable negligence and incompetence at almost all levels of government can more or less be conclusively established by the testimonies of witnesses,” the report said.

The commission said it had found nothing to support allegations of complicity but neither could it rule out the possibility of “‘plausibly deniable’ support” from current or former officials. Without naming anyone, it urged the “individuals who wielded primary authority in national decision making”—a clear reference to the military and the then PPP-led coalition government in the center—to step forward and apologize to the nation.

The 336-page report included new information about bin Laden’s day-to-day life after he fled the 2001 U.S.-led invasion of Afghanistan, arriving in Pakistan in the spring or summer of 2002. He stayed in Afghan border areas, the northwestern districts Swat and Haripur, and possibly other places before settling in Abbottabad in August 2005.

The widow of one of two Pakistanis who provided his core support network said they—including bin Laden—were once all stopped for speeding in Swat. Her husband “very quickly settled the matter with the policeman and they drove on,” the report said without saying how.

While in the mountainous region, bin Laden was said to have met Khalid Sheikh Muhammad, the mastermind of the 9/11 attacks, in February 2003. Pakistani authorities arrested Muhammad a month later.

By 2005, the same year that bin Laden moved to Abbottabad, Pakistan’s Inter-Services Intelligence agency had closed its file on the hunt for the Al Qaeda supremo.

Foreign accusations that bin Laden was probably in Pakistan were not taken seriously by the government of then military ruler Pervez Musharraf, nor were possible military implications ever considered, the report said.

In Abbottabad, testimony from his widows said bin Laden wore a cowboy hat when he moved about the compound to avoid detection from overhead. If he felt ill, he treated himself with traditional Arab medicine and “whenever he felt sluggish he would take some chocolate with an apple,” the report said.

He led an austere life, overseeing the religious education and play of his children and grandchildren “which included cultivating vegetable plots with simple prizes for best performances.”

But for nearly six years, unusual security arrangements at his villa and other abnormalities failed to attract attention from Pakistani officialdom.

“How the entire neighborhood, local officials, police and security and intelligence officials all missed the size, the strange shape, the barbed wire, the lack of cars and visitors, etc., over a period of nearly six years beggars belief,” the report said.

Bin Laden had retired to his room with the youngest of his three wives, Amal, when they were awakened by what “sounded like a storm” shortly after midnight. They rushed to the balcony, “but it was a moonless night and pitch dark.”

Now aware that the long-feared U.S. threat was closing in, bin Laden stopped his wife from turning on a lamp and called for his son Khalid. While two of his daughters recited verses from the Quran, bin Laden and Khalid prepared to take their last stand—though the report also states he was unarmed when killed.

Later, when Amal saw a U.S. soldier pointing his weapon at the terror chief from the landing of their bedroom, she rushed at him while the soldier shouted “No! No!” and shot her in the knee.

After the raid, U.S. forces made off with belongings including computer hardware but also personal effects including gold and bin Laden’s will.

One of his wives “had previously read the will but did not wish to divulge the details. She said it was not political and pertained only to personal and family-related matters.”

“Other reports suggested that the will said his children should not seek the leadership of Al Qaeda,” the report added.

do people actually buy in to this bull shit???? lol