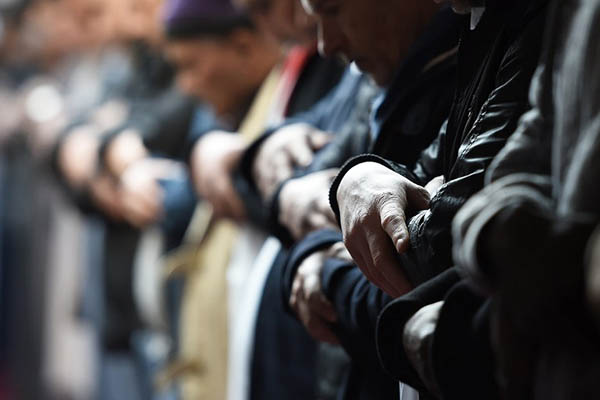 French Muslim youths have to be increasingly wary of jihadi ‘sellers of dreams.’

The first time jihadi recruiters approached 16-year-old Yacine outside his mosque in a rundown Paris suburb, they got right to the point. “We started talking about Syria right off the bat,” he said, recounting how they talked about “the holy war and how you should die a martyr and go to paradise, it was the best way to die.”

The following Friday, he tried to leave the mosque before the end of prayers, but they cornered him, again pressuring him with their “precise, well-honed pitch,” but he managed to get away. Now Yacine, who assumes he was targeted because he is a devout Muslim, has started going to a different mosque. But he does not hang around afterwards: “I pray and I leave.”

The attacks in Paris and Brussels of November and March have thrown a spotlight on poor mainly immigrant neighborhoods as targets for jihadist recruiters. France’s communities minister, Patrick Kanner, claimed that some 100 French neighborhoods have “similar potential” as Molenbeek, the Brussels district that spawned many of the jihadists behind recent attacks in Europe.

In a series of interviews with AFP, Yacine and other youths in the Paris suburbs said they know people who have joined the ranks of the Islamic State group. They post photos and videos on Facebook or SnapChat of themselves “killing people… always with a smile,” as if they were sending postcards from “summer camp,” Yacine said. “I thank God my parents and my big brother have kept a close eye on me,” he added.

Another student, 18-year-old Nassim, says he has “fortunately” never crossed paths with jihadist recruiters. But in March 2015, a childhood friend of his, after dropping out of school, left for Syria with another youth from Noisy-le-Sec, east of Paris. Last autumn, he posted a picture of himself with three “brothers” having a meal with a Kalashnikov in view. One of the three was 20-year-old Bilal Hadfi, who would go on to become one of the suicide bombers in the Nov. 13 attacks in Paris.

“They said they were going skiing. It was a real shock,” Nassim said. “He [the friend] was more than a friend, like a big brother. His mother cried a lot, so did his father.”

Religious fervor has little to do with the appeal of jihad, said Farhad Khosrokhavar, research director at France’s School for Advanced Studies in the Social Sciences. “Going there [to Syria] makes them feel rich first of all,” because I.S. provides them with housing, plenty of food and so on, Khosrokhavar said. Secondly, “it’s a coming of age through heroism, violence and self-affirmation, while… in France these are people who are virtually insignificant.”

But Nassim said he is not having any of it. “It’s better to be poor here than rich over there,” he said.

At a fast-food joint in nearby Rosny-sous-Bois, 18-year-old Byllel said he feels the same way: “I’m sure I would never be taken in by them because I have a good faith, a nice life.” But he remains wary. “They talk a good game,” he said. “They promise a direct ticket to paradise, they are sellers of dreams.”

Their classmate Ismael feels less secure. “I don’t know if I am mentally prepared because those people are very, very strong. Sending off 1,000 people [to Syria] is really something.”

According to the latest official figures, more than 2,000 French citizens or residents have been involved in jihadist cells and more than 600 have been to Syria or Iraq, including 85 minors. “The main enemy is the Internet,” said Nadia Dali, a counselor at a high school in Noisy-le-Sec who is familiar with the online techniques of jihadi propagandists. “A student will ‘like’ a page showing a child in Syria or… post a somewhat aggressive comment, and a [recruiter] responds, ‘hey how about…?’” Or a recruiter can make contact while playing a wildly popular online game such as Call of Duty, League of Legends or World of Warcraft.

Dali, 40, said students should be urged to “protect themselves” by learning to lock their Facebook walls and other safeguards. But she said it was especially important for schools to pay close attention to the students and their families.

In order to “shut out” the recruiters, Dali tries to saturate students’ free time with clubs, workshops and “talking shops,” leaving the high school’s doors open until 8:00 pm. “They feel at home here,” said the school’s principal, Philippe Le Coz.