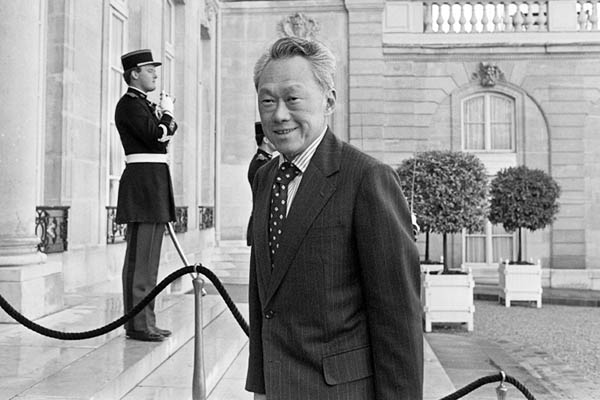 Lee’s son, Prime Minister Lee Hsien Loong, said in a statement that he was “deeply grieved to announce the passing of Mr. Lee Kuan Yew, the founding Prime Minister of Singapore. Mr. Lee passed away peacefully at the Singapore General Hospital today at 3:18 a.m.” He was 91.

The elder Lee, who dominated Singapore politics for more than half a century, had been in hospital since Feb. 5 with severe pneumonia. Two years before he died, he disclosed that he had signed a medical directive instructing doctors not to use any life-sustaining treatment if he could not be resuscitated.

Lee was prime minister from 1959, when colonial ruler Britain granted Singapore self-rule, to 1990. He led Singapore to independence in 1965 after a brief and stormy union with Malaysia. The widely revered patriarch’s death is likely to cast a pall over preparations for the city-state’s 50th anniversary of independence on Aug. 9.

Prime Minister Lee also announced his father’s death on his Facebook page and was immediately flooded with messages of condolence. “Great Man, Great Legacy. The world is poorer by his passing,” posted Kasise Ricky Peprah.

U.N. Secretary-General Ban Ki-moon said he was “deeply saddened” by Lee’s death and offered his condolences. “Lee Kuan Yew was a legendary figure in Asia, widely respected for his strong leadership and statesmanship,” a spokesman for Ban said in a statement.

Eugene Tan, associate professor of law at the Singapore Management University, said that Lee’s death “certainly marks the end of an era,” adding that “it raises the question of how Singapore is going to go from here.”

On Lee’s watch, Singapore became a sea trade, air transport and financial hub as well as a high-tech industrial center, prospering despite its compact size and lack of basic natural resources. “I have to say his success is in taking advantage of Singapore’s natural assets, by which I particularly mean using its geography at the end of the Malay peninsula and on the end of the Malacca Strait,” said Michael Barr, an associate professor of international relations at Flinders University in Australia who wrote a book on Lee’s career.

On the diplomatic front, Lee’s counsel was often sought by Western leaders, particularly on China, which Lee identified early as a driver of world economic growth, as well as more volatile neighbors in Southeast Asia.

But the British-trained lawyer has also been criticized for jailing political opponents, and driving his critics to self-imposed exile or financial ruin as a result of costly libel suits. “The worst legacy is too much authoritarianism, and too much of an emphasis on economic performance,” said Reuben Wong, associate professor of political science at the National University of Singapore. “His greatest legacy is making Singapore a developed country, showing that a former colony and an Asian country can do as well and in many ways better than many of the older Western developed countries,” he told AFP.

Singapore strictly controls freedom of speech and assembly and, while it has become more liberal in recent years, still uses corporal punishment for crimes considered relatively minor elsewhere, such as spraying graffiti.

Lee stepped down in 1990 in favor of his deputy Goh Chok Tong, who in turn handed the reins to the former leader’s eldest child Lee Hsien Loong in 2004.

The People’s Action Party (PAP), which was co-founded by the elder Lee, has won every election since 1959 and currently holds 80 of the 87 seats in parliament.

Lee retired from advisory roles in government in 2011 after the PAP suffered its worst poll result since it came to power, getting only 60 percent of votes cast amid public anger over a large influx of immigrants, the rising cost of living, urban congestion and insufficient supply of public housing. He rapidly began to look feeble after his wife of 63 years, Kwa Geok Choo, died in 2010, and has rarely appeared in public in the last two years.

In his last book One Man’s View of the World, published in 2013, Lee looked back at his remarkable career and concluded: “I am not given to making sense out of life—or coming up with some grand narrative on it—other than to measure it by what you think you want to do in life.”

“As for me, I have done what I had wanted to, to the best of my ability. I am satisfied.”