Left in the Cold 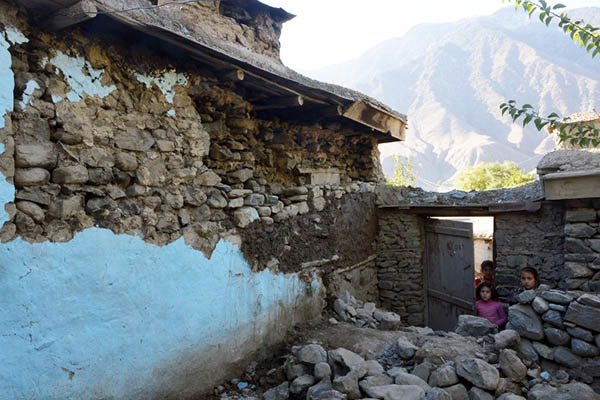 Three days after a 7.5 magnitude earthquake hit Afghan and Pakistan, survivors are still without shelter.

Entire communities of earthquake survivors in Afghanistan and Pakistan were spending a third night without shelter in plummeting temperatures Wednesday, with fears growing for children sleeping in the open as rescuers struggled to reach remote mountainous regions.

Rugged terrain, severed communication lines and an unstable security situation have impeded relief efforts since Monday’s 7.5 magnitude quake ripped through the region, triggering landslides and flattening buildings. More than 380 people have been killed.

Desperate victims appealed for blankets, warm clothes and food after the quake leveled thousands of homes, forcing many to camp out in the open. “Winter is coming and soon there will be snow everywhere, the children won’t survive the cold,” Shahroon, a resident of Usiak village in Chitral district in the worst-hit province of Khyber-Pakhtunkhwa, told AFP on Wednesday. Shahroon said children in his family as young as four were sleeping outside.

“If we stay here the kids will die… we have lost everything already and can’t afford to see these children die in front of us, they are the only valuables we have now.”

If the government can help them rebuild before the snow comes they will stay, he said—but “otherwise we will go to Rawalpindi or Peshawar or any other city and spend our lives begging on the roads.”

Pakistan’s confirmed death toll stood at 267 with more than 1,800 people injured and 11,000 homes damaged, and authorities warn that the number could spike with many isolated regions still cut off. “Shelter and hygiene will be most likely the main needs, as it is already snowing in some of the more mountainous areas,” said Shelagh Woods, country representative for medical charity MSF in Pakistan.

The U.N. children’s agency UNICEF warned that children in the earthquake-hit areas “are facing further deadly threats as extreme conditions and insecurity cut off communities from aid.”

“The earthquake has carried away the roofs of our houses,” 70-year-old grandmother Gul Subhana told AFP tearfully in a village in Shangla district. “Where do we live?”

Western charities said the Taliban presence in Afghanistan was hindering relief efforts. The militants on Wednesday claimed to have overrun the remote district of Darqad in the quake-hit northern province of Takhar, underscoring the fragile security situation facing relief workers.

The insurgents on Tuesday had urged aid organizations not to delay in delivering relief, and vowed their fighters would provide “complete help” in affected areas.

Afghan officials said 115 people were confirmed dead and hundreds more injured, with casualties reported from around half a dozen of the country’s 34 provinces, and more than 7,600 homes reported damaged.

Desperate survivors were left marooned on mountaintops in Badakhshan, the remote province where the epicenter was located and where much of the territory is controlled by the Taliban. The quake was centered near Jurm in northeast Afghanistan, 250 kilometers from the capital Kabul and at a depth of 213.5 kilometers, the U.S. Geological Survey said.

Aid agencies have stressed the need for greater disaster preparedness in war-torn Afghanistan, which remains extremely susceptible to recurring natural disasters such as floods, earthquakes and landslides. But disaster planning has been a low priority for the nation struggling to end a 14-year war against the Taliban insurgents.

The military has been leading Pakistan’s rescue efforts, sending in medical teams, tents and rations and evacuating some people by helicopter. Rescue work has begun in the district of Kohistan, which had been cut off from authorities Monday and Tuesday.

Kohistan police official Javed Khan told AFP that at least 12 people had been killed in the province and some 350 houses damaged. “Rescue work has been started but on a limited scale. We are constantly receiving reports of damages from far-flung inaccessible areas.”

Prime Minister Nawaz Sharif, who visited Peshawar on Wednesday before heading to Chitral, announced a compensation package for those who lost their homes, saying it would be fast-tracked ahead of winter. But critics in Pakistan said authorities have still not learnt from the catastrophic quake of October 2005, which killed more than 75,000 people and displaced some 3.5 million.