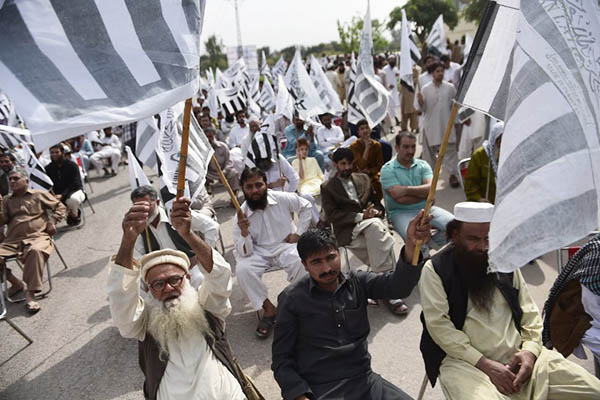 Jamaat-ud-Dawah activists demonstrate in favor of the Saudi-led coalition in Islamabad. Farooq Naeem—AFP

Pakistani nationals in Yemen have no way of leaving the strife-torn country due to Islamabad’s inaction.

The Government of Pakistan has yet to announce any contingency plan to evacuate Pakistani nationals from strife-torn Yemen even as a Saudi Arabia-led coalition targets the nation’s capital as part of an ongoing campaign against the Houthi rebels.

Saudi Arabia and a coalition of 10 other countries, including the Gulf Cooperation Council, on Thursday launched airstrikes in Yemen to prevent the Iran-backed Houthis from seizing more territory in the country. At least 39 civilians in the capital, Sanaa, have been killed in Operation Decisive Storm so far, according to Yemeni health ministry officials.

On Wednesday, the Saudi Press Agency claimed Islamabad had also expressed a desire to join the coalition, but Pakistan’s defense minister has denied this. On Thursday night, Prime Minister Nawaz Sharif said Islamabad was ready to defend Saudi Arabia’s “territorial integrity,” but ruled out any immediate participation in the fighting. This has left the 2,000 Pakistanis currently living in Yemen in a state of limbo.

Nearly half of all Pakistani nationals in Yemen live in the besieged capital, employed by banks or audit firms. They have no way of leaving, according to embassy officials.

“We urgently need to begin evacuating our people,” an official at the Pakistan embassy in Sanaa told Newsweek on condition of anonymity. “This is an emergency. Please tell the Government of Pakistan they have a responsibility to their people, first and foremost.” Another official echoed the concerns. “The Pakistanis are stranded,” he said. “They are calling us frantically. All the airports are closed. One option is to ship them out.”

Other countries, including India, Indonesia and Lebanon, have already begun evacuating their nationals via both sea and air.

Pervaiz Iftikhar Hussain, a businessman living in Sanaa for the past 38 years, said the situation was growing tense. “People are very nervous,” he told Newsweek via phone from Sanaa, adding that if Islamabad joined the anti-Houthi coalition, the Pakistani nationals could face retaliation from locals.

In 1969, Pakistan Air Force pilots assisted Saudi Arabia in repulsing a South Yemeni incursion into the kingdom’s southern border. According to Hussain, those attacks provoked a sweeping anti-Pakistan sentiment. “We could not buy groceries without being rebuked,” he says, “Cabbies would say, ‘You Pakistanis are killing Yeminis with the Saudis.’ It was a difficult time.”

Embassy officials are also concerned about a potential blowback. “If you are a Pakistani, Yemen is a great place to live. Pakistanis here are professionals—doctors, engineers, and bankers. They respect you. But that will change [if we join the Saudi-led coalition].”

Borders are being blurred in Middle East.