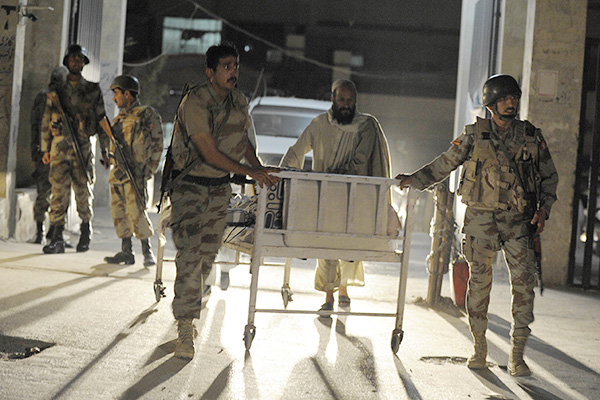 Lashkar-e-Jhangvi, the terrorist group responsible for a series of bloody assaults on Shia Muslims, has said it carried out the attack on a bus carrying female students in Quetta and the attack on a hospital the same day. At least 25 people died in the attacks.

In a telephonic conversation with journalists, Jhangvi said a female suicide bomber struck the bus in Quetta, capital of Balochistan province, on Saturday and killed 14 women students. A follow-up attack around 90 minutes later targeted a hospital treating survivors, leaving at least 11 dead. It led to a prolonged gun battle between security forces and militants, who were occupying part of the building.

Abubakar Siddiq, a spokesman for Jhangvi, called newspaper offices in Quetta late Saturday to claim the killings. “The suicide attack on the bus was carried out by one of our sisters. She boarded the student bus and blew herself up,” Siddiq said. “Then we carried out a second suicide attack at the hospital and our fighters killed several people. We did this because security forces killed our fighters and their wives in Kharotabad.”

Security forces on June 6 killed at least three militants and two women during a raid at a house in the Kharotabad neighborhood of Quetta. Officials said they belonged to Tehreek-e-Taliban Pakistan, with whom Jhangvi has links.

The Jhangvi attacks came hours after a national monument linked to Pakistan’s founding father, Jinnah, was destroyed by the separatist Balochistan Liberation Army in Ziarat, 80 kilometers southeast of Quetta.

Quetta is a flashpoint for sectarian violence, and the city saw the country’s two bloodiest attacks so far this year. A bomb planted in a water tanker being towed by a tractor killed 90 Shia Hazaras in February, while another suicide bombing at a snooker club in January killed 92 others. Jhangvi claimed responsibility for both attacks.

The bus targeted in Saturday’s attack was from Sardar Bahadur Khan Women’s University, which is located close to a Shia Hazara neighborhood in Quetta and where many Hazaras are students.