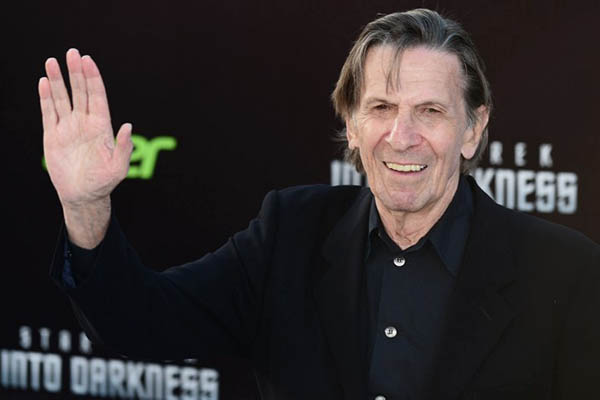 Veteran actor renowned for his turn as Spock on ‘Star Trek’ died at his home in Los Angeles.

Nimoy, who suffered from chronic obstructive pulmonary disease, died at his home in Los Angeles, his family and agent said. A private memorial service was being planned. Tributes poured in from castmates, actors, fans, the wider science community—and President Barack Obama.

“I loved him like a brother. We will all miss his humor, his talent, and his capacity to love,” said William Shatner, who played Captain James T. Kirk on the groundbreaking Star Trek, which debuted in the 1960s. George Takei, who portrayed Mr. Sulu on the sci-fi show, tweeted: “Rest in peace with the stars, my dear friend.”

“So many of us at NASA were inspired by Star Trek. Boldly go …” the U.S. space agency said on Twitter, highlighting one of the series’ main catchphrases—“To boldly go where no man has gone before.” Obama said simply: “I loved Spock.”

Born in Boston on March 26, 1931 to Jewish immigrant parents from what is now Ukraine, Nimoy left for Hollywood at the age of 18, winning a sprinkling of small parts in 1950s television series. With his square jaw and serious features, Nimoy worked his way into showbiz playing cowboy characters and lawmen before he found a niche that would last a lifetime in the world of science fiction.

In 1966 he was cast in his greatest role—as the ever-logical Spock, the science officer aboard the spaceship USS Enterprise, which ventured around the galaxy, exploring new worlds in death-defying odysseys.

Spock was the cool counterpoint to Kirk, played by Shatner, and the even-tempered sparring partner of ship doctor Leonard “Bones” McCoy, played by DeForest Kelley. The trinity had ratings-boosting chemistry that sustained Star Trek during its initial four-year run.

Spock would be resurrected for several feature films after Star Trek snowballed into a cultural phenomenon in the 70s and 80s, making his Vulcan salute and salutation “live long and prosper” a touchstone of the science-fiction world. Nimoy later revealed he based the hand gesture on a Jewish blessing.

In addition to acting, Nimoy was an accomplished director. He directed two of the Star Trek films including one of the most well received, Star Trek IV: The Voyage Home. Nimoy also directed 1987 hit comedy 3 Men and a Baby starring Tom Selleck.

Nimoy, along with some of his co-stars, struggled with the typecasting stardom he was thrown into by legions of earnest Star Trek fans. In 1975 he authored the book I am Not Spock, attempting to open up space between himself, and the character that had so captured people’s imaginations.

While Star Trek fever built, Nimoy starred in Invasion of the Body Snatchers in 1978, and then alongside Ingrid Bergman in 1982’s A Woman Called Golda.

Nimoy would eventually embrace his role as an authority figure in the sci-fi world. He wrote a rebuttal to his earlier memoir, titled I am Spock, in 1995.

As Spock, Nimoy became a role model for nerds and geeks: he was calm under pressure with a logical response always at the ready. He related an “embarrassing” anecdote to The New York Times in 2009 when he toured a California university with scientists who looked to Spock for approval. “Then they’d say to me, ‘What do you think?’ Expecting me to have some very sound advice. And I would nod very quietly and very sagely I would say, ‘You’re on the right track’.”

Nimoy had two children with his first wife, and was married to his second wife Susan since 1989.

Nimoy built off his sci-fi and Spock fame for the rest of his career, lending his voice to documentaries, video games and television shows. He sold “Live Long and Prosper” apparel, and waved the Vulcan salute at Star Trek conventions. He returned to Star Trek as an older version of his Spock character in the franchise’s reboot directed by J. J. Abrams in 2009 and in a 2013 sequel.

Nimoy remained active in his later years, releasing photography books and poetry. He also took a role on sci-fi TV series Fringe, which ran from 2008 to 2013 and was also directed by Abrams.

In his last tweet, posted Monday under his handle @TheRealNimoy, Nimoy said: “A life is like a garden. Perfect moments can be had, but not preserved, except in memory.”

In the heart of Hollywood on Friday, fans paid tribute to Nimoy at his star on the Walk of Fame. “Before Obi-Wan, before Yoda, before Star Wars—there was Spock,” said Gregg Donovan, an English-born actor dressed in a top hat, a red tailcoat and white gloves, who said he once bagged Nimoy’s groceries at a Los Angeles supermarket. “I always remember his kindness. I told him I was a member of the Screen Actors Guild and he said, ‘Keep going, don’t give up’.”