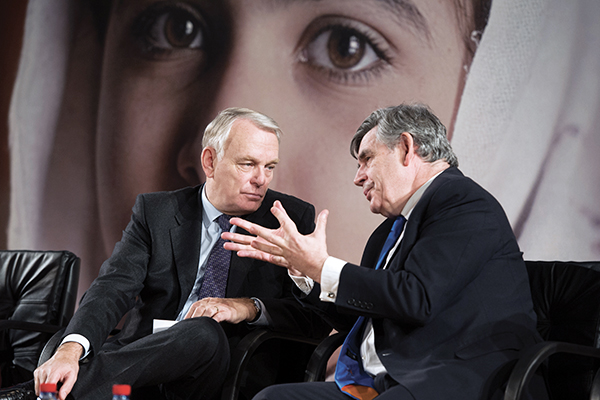 Brown with the French prime minister at the ‘Stand Up for Malala’ event on Dec. 10 in Paris. Bertrand Langlois—AFP

Attacks on Pakistani schools have emboldened students and teachers alike.

[dropcap]A[/dropcap]s pupils gathered in their school in Karachi’s Baldia Town on March 30 to receive their exam results, grenades were hurled into the compound causing carnage. Principal Abdul Rasheed, affiliated with the Awami National Party, died on the spot.

The perpetrators are thought to be from the Pakistani Taliban, whose campaign of violence against girls’ education has moved from the tribal areas into Pakistan’s largest city. The school attack followed the murder four days earlier in the Khyber tribal agency of Shahnaz Nazli—a 41-year-old teacher gunned down in front of one of her children only 200 meters from the all-girls school where she taught.

But this time the wave of terror attacks—orchestrated by opponents of girls’ education—is provoking a domestic and international response, a groundswell of public revulsion similar to that which followed the attempted assassination of Malala Yousafzai, who was also shot simply for wanting girls to go to school.

On top of an international petition calling for cessation of violence against teachers who are defending girls’ right to go to school, a scholarship fund in honor of the slain Nazli has been announced. Education International, a world teachers’ organization with 30 million members, has said that the scholarship memorial to Nazli will support Pakistani teachers and students victimized simply because of their support for girls’ schooling.

The petition and the memorial signal a fight back against attempts to ban girls’ education and come in the wake of the intervention of U.N. Secretary-General Ban Ki-moon, who, in a special communiqué, spoke out against Nazli’s shooting and gave his personal support to teachers persecuted for their advocacy.

Last month’s attacks are, however, a stark reminder to the world of the persistence of threats, intimidation, shootings, arson attacks, and sometimes even murder, which are the Taliban’s weapons in a war against opportunity for girls.

Last October, shocked by the attempted assassination of Malala and pressured by a petition signed by 3 million people, the Pakistani government made compulsory free education and provided stipends for 3 million children. Now authorities in Pakistan are under international pressure to deploy their security services to ensure the safety and protection of teachers and girls trying to go to school.

Demonstrations in support of Malala were a spontaneous response from girls who identified with her cause as she fought for her life in Birmingham’s Queen Elizabeth Hospital. Now these girls are being joined by a high-profile campaign conducted by teachers themselves, determined, despite the threat to their lives, to stand up for girls’ education and to take their campaign even to the most dangerous of places.

The protests are timely. Achieving universal girls’ education was one of the major themes of meetings in Washington, D.C., on April 17 and 18, when the U.N. secretary-general and the president of the World Bank, Jim Yong Kim—spurred by the recent loss of momentum in meeting the Millennium Development Goal on education—met countries that are off track in securing universal primary education.

Worried that the figure of 32 million girls still unable to go to primary school remains stubbornly high, they considered plans to use legislation, investment incentives, and reform to move further and faster to full enrollment of girls by the end of 2015. But if the cultural discrimination that keeps girls from school is to end, then a popular movement that challenges the prejudices of the extremists is urgently needed.

Teachers themselves are now determined, despite the threats, to stand up for girls’ education even in the most dangerous of places.

It can build on an increasingly vocal public sentiment against the exclusion of girls. For while over the past several years the Pakistani Taliban have destroyed hundreds of schools in, for example, Khyber-Pakhtunkhwa province, there is now also a fight back under way led by girls themselves and their teachers. When I visited Pakistan in the wake of Malala’s shooting, I saw firsthand the determination of girls wearing “I am Malala” headbands. No longer were they to be part of a silent majority unwilling to speak up. Instead they were becoming an assertive voice on the streets, and also online, for their rights.

Defiance is also growing in Afghanistan, where for years teachers and girls have been under pressure to stay away from school because, despite the removal of the Taliban from national government, the extremist group remains powerful in the tribal areas. It is estimated that as many as 400 schools have been shut in Afghanistan as the Taliban have sought to impose their control. Some parents have taken their children out of school because they do not want to be trapped in the middle of the crossfire between the Taliban and security forces. There have even been allegations that Taliban extremists were poisoning schoolgirls by infecting water supplies.

Yet, remarkably, schools are being kept open, and some are being reopened by determined teachers and pupils. Some teachers have gone underground, sometimes under the guise of classes offering only sewing lessons, and continued to teach girls. In total, 4 million Afghan girls are now at school.

Education International has a proud record in defending teachers against abuse, intimidation, and harassment. Its decision to intervene openly in Pakistan for the rights of teachers opens a new front in the battle to ensure girls are educated.

It is a reminder that while our 21st-century debates are about the empowerment of girls and their right to develop their full potential, in some parts of the world the 19th- and 20th-century battles for basic rights—freedom from violence; freedom from child labor, child marriage, and child trafficking; and the right to an education free from violence—have still to be won.

But as the forthcoming teachers’ initiative and the U.N. secretary-general’s vocal support both demonstrate, the voices in favor of these basic rights for girls cannot any longer be silenced. And because this is a movement that is now being forged at the grassroots by girls demanding their human rights and by teachers organizing in support of them, 2013, which has started with so many violent attacks on girls’ schools, can still become the year when the cause of universal girls’ education becomes unstoppable.