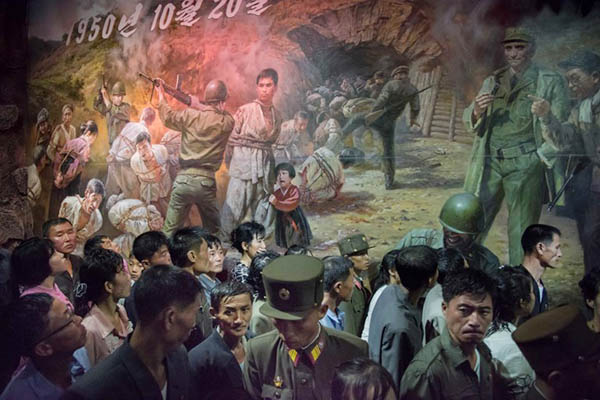 Every few minutes a new set of visitors arrives at the ‘Revenge-Pledging Place’ at North Korea’s Sinchon Museum, where regime propaganda insists U.S. troops massacred more than 35,000 people during the Korean War.

A volunteer among the group—they could be from a school, army unit, factory or official organization—stands up in the concrete amphitheater, where a mural reads “Let us drive out the Americans and reunify our nation,” to issue a vitriolic denunciation of the U.S. Fists clenched in the air, the crowd responds with unison shouts: “Smash! Smash! Smash!”

Opposition to the United States is a fundamental cornerstone of Democratic People’s Republic of Korea, as the North is officially known. Pyongyang says the nuclear arsenal it has spent decades developing, suffering sanctions and isolation as a result, is to defend itself from a possible U.S. invasion.

That means next week’s Singapore summit between leader Kim Jong-Un and U.S. President Donald Trump—where the North’s weapons will top the agenda—presents a potential conundrum: could making peace with the enemy undermine the authorities’ claim to legitimacy?

The Kim dynasty bases its right to rule in founder Kim Il-Sung’s role in the 20th century fight against Japanese colonial rule. According to the orthodoxy, that historic mission was interrupted when the U.S. and Soviet Union divided the peninsula between them after Tokyo’s surrender ended the Second World War. The North’s attempt to reunify it by force with its 1950 invasion was then thwarted again by a U.S.-led United Nations coalition.

The vilification of the U.S.—and Japan—is constant in the North, from books and films to education centers in Pyongyang and across the country, including the centerpiece museum in Sinchon, which receives 500,000 visitors a year according to the official KCNA news agency.

It portrays U.S. troops committing a litany of atrocities in the area, their hands gnarled and their features twisted as they drive nails into their defiant victims’ heads, crush them to death, or cut off a woman’s breast. The Americans, said guide Ri Kum Ju, even engaged in cannibalism.

“They killed people individually in brutal ways beyond human imagination, including pulling out eyeballs, searing the entire body with hot iron or cutting pieces of flesh and eating it with salt.”

There is one fundamental problem with this narrative: whatever happened at Sinchon in the autumn of 1950—and the exact details including the true toll are lost to the chaos of conflict—independent researchers say there is no evidence it was carried out by the U.S.

According to Leeds University historian Adam Cathcart, who has researched Sinchon extensively, the first foreign unit on the scene was British rather than American, and the town was of little interest to the U.S.-led allied troops, including South Korean forces, who were advancing rapidly northwards Pyongyang. There were undoubtedly atrocities on both sides in the war, which saw millions killed in just three years, but Cathcart says there were waves of retribution killings in and around Sinchon county that autumn between Communists, and Christians and other anti-regime elements.

“This was a case of Koreans killing Koreans in the fog of war, not an American attempt to wipe out an entire county of communists through medieval methods,” he says.

The North’s portrayal of Sinchon was “simply extremely out of line with the reality of the war,” he told AFP, but had “underpinned a great deal of anti-U.S. propaganda.”

One of the key exhibits at the museum is resident Ju Sang Won, now in his 70s, who says his father was dismembered by being pulled apart between two carts, and that he survived the killing of hundreds of people who were forced into a powder magazine that was then blown up. “The U.S. imperialists are a pack of wolves in human form,” he said. “We are in a quasi state of war. We must fight the American bastards to the end.”

A potential peace treaty to formally end the Korean War—hostilities stopped in 1953 only with a ceasefire—is likely to be discussed in Singapore, but without the framework of U.S. imperialism, said Robert Kelly of Pusan National University, Pyongyang would struggle “to explain ideologically to North Koreans why Korea is still divided.”

Other analysts are more optimistic. “We saw in the cases of China and Vietnam how Communist propaganda could repurpose their messaging away from anti-American vitriol,” said John Delury of Yonsei University. “Both systems ‘survived’ the loss of the U.S. as an enemy state.”

Even so, primary school vice director Jang Yun Chang, who led the chants outside the Sinchon museum, was adamant. “I will deeply ingrain in my students the brutal nature of the U.S. imperialists, and that it will never change,” he said. “My spirit for revenge is growing stronger.”