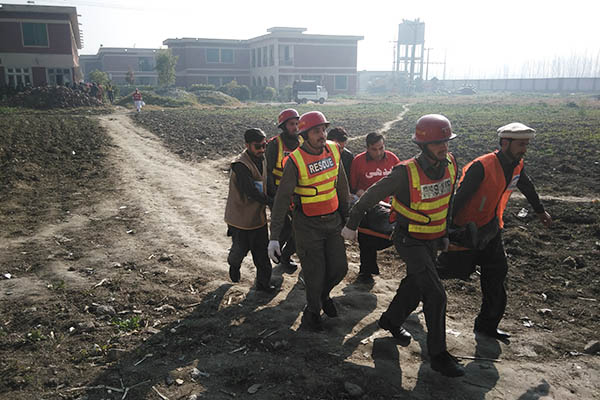 No amount of intelligence-based military operations can stop every single terror attack.

The Jan. 20 terrorist attack on Bacha Khan University in Charsadda has thrown Pakistan back to December 16, that tragic day in 2014 when terrorists attacked and murdered 144 children at Peshawar’s Army Public School.

Just like that attack, this one was also masterminded by Khalifa Umar Mansoor, a terrorist commanding operations in Peshawar and Dara Adam Khel for Tariq Geedar’s group. This man, after the APS carnage, had threatened more such attacks. A year and two weeks later came the Jan. 20 attack.

Predictably, and to the expectation and objective of TTP terrorists, people have begun questioning the efficacy of Operation Zarb-e Azb and intelligence-based operations conducted since then under the National Action Plan. Social media commentary reflects despondency with the refrain that terrorists have not been degraded. Is this correct?

Only partly. But before I get into the discussion about people’s expectations, let me put it on record that some blame for the post-Jan. 20 mood must be apportioned to the civil and military leadership too.

This is what I wrote on June 30, 2014 in this magazine: “Operation Zarb-e Azb is on. Prime Minister Nawaz Sharif says the country has embarked on a decisive battle against terrorism. In a press briefing, the military spokesman was reported as saying much the same.”

Fighting conventional wars is easy. You know the enemy and can identify it. You wear a uniform, as does the enemy. There’s a front and there’s a secure rear. You guard your flanks. You can win or lose or, sometimes, there’s a stalemate. Not so with irregular war, especially one that is fought among the people. For one it is not just a linear strength of arms. It is a contested zone of very high complexity. The complexity gets even more complex if the war is not just being fought among the people but among and against one’s own people.

Is Zarb-e Azb successful? The answer will depend on whether the operation’s objectives have been achieved. It will also depend on the cost of the operation. The military has physically dominated most parts of the North Waziristan Agency, except Shawal. That’s important and that’s necessary. It’s not sufficient. In a strategic triangle, one has to dominate at least two ends of the triangle. Physical dominance is just one end of it.

Have intelligence-based operations been successful? Yes, for the most part. Is there a cost in terms of shrinking civil liberties and rights? Yes, indeed. Is it possible to be successful without such cost? Not really.

This should give one some idea of the ecosystem in which the state and its security forces have to operate.

So, how do we benchmark success or failure? Such is the nature of this war that one can look at the glass as half full, half empty or, worse, half empty and leaking. For instance, one can either focus on how many students at the varsity have been murdered or one can look at how many more were saved. Similarly, one can either talk about raids, arrests and preemptions or talk about attacks that have happened. Or the fact that terrorists are now choosing soft targets precisely because their capacity to take on hard targets has been degraded. Would one declare success because they can’t take on a hard target or announce failure because they can still sneak in people and cause mayhem?

People are asking if this is an intelligence failure. Some have already decided that it is. None of them knows how intelligence works or even what intelligence failure means. But death and despondency have a way of making tongues wag, even if inexpertly. And that is legitimate. Everything is allowed in a state of sorrow.

But fighting wars is not a function of fear and despondency. One of the central maxims of warfare is to break the enemy’s will to fight. Fear breaks the will. Which is why it is important for us to keep our heads intact and think rationally. Doing so, first and foremost, requires understanding the nature of this war and the strategy of the enemy.

The security forces operated quickly and neutralized the attackers. But doing so came at a cost. From that perspective the attackers succeeded in their mission after more than a year. But can we ignore everything the security forces have done in the year between APS and BKU, just because much of what they have done and continue to do happens away from public glare and is not spectacular?

Some have raised the question of how terrorists can move through multiple checkpoints with weapons and ammo. Firstly, such attacks are planned over months and weeks. The attackers never travel together with weapons and ammo. Their standard assault rifle, the AK-47 and its variants, can be field stripped into 11 parts. Quick field stripping into seven parts with an expert hand can be done in less than a minute. Those parts can be easily concealed and transported. Ditto for ammunition, grenades and explosives for IED belts. All these materials can be carried in multiple vehicles over many weeks to the command center close to the ops area and put together. The terrorist group recces the area thoroughly, marking routes that are easy and safe to negotiate et cetera.

The point being, it is not so easy, given the volume of traffic, to check every vehicle—unless there is specific intelligence about a vehicle that can be stopped and pulled apart. That’s rare.

The attack on BKU is very tragic. The loss of life bleeds one’s heart. But, given where we stand, such attacks will happen and we won’t be able to stop all of them. That’s the unfortunate reality we have to live with for a long time.

Rationally delivered discourse. This what we need to think to guard against the future happenings. Are we safe in other edu institutions. Answer is ‘No’. So what we were required to do post 16 December and what we did? Do we require some changes in NAP? Are we ready to implement it whole heartedly. Lets get out from this oblivion and smoggy state of mind. This may not be the last incident but appropriate concrete measures are required to deal with such happenings…..

Well brought out reality. Our armed/security forces are giving their best. Out of 20 pts of NAP all related to Army are being acted upon in true sense but those which federal or provincial govt to take action are still pending. Its because of lack of will to safe their own corruption not all but most of them. But I’m sure Pakistan’s future is stable INSHALLAH.. Pakistan secirity forces zindabad..Pakistan Paindabad

Well done, E the H. Another good one from you.