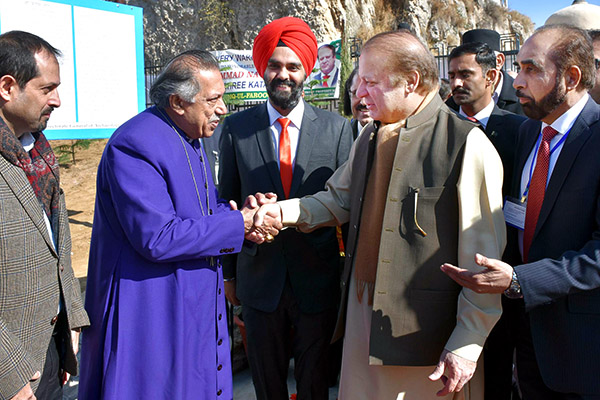 Most moderates in Pakistan have appreciated Prime Minister Nawaz Sharif’s conversation with non-Muslim minorities at the 900-year-old Katasraj temple in Chakwal, one of the holiest sites in South Asia for Hindus. He said: “In my personal view, we are all equal—Muslims, Hindus, Sikhs, Christians—and people belonging to other religions; we are all one.”

This isn’t the first time Sharif has proffered an olive branch to religious minorities. Last April, he offended many by using the word “liberal” while addressing Karachi’s Hindu community. Then, at Christmas, he allowed a Christmas-themed train to crisscross Pakistan and facilitate the Christian community, much harassed under the blasphemy law, in celebrating their holy occasion and “promoting tolerance in Muslim Pakistan.” The train was adorned with Christmas lights and mock snowmen, and featured portraits of notable Christian Pakistanis.

Will there be another backlash to his latest statement from elements that have gained power through Pakistan’s proxy jihad of the past 25 years? It would not be surprising. After his fraternization with Hindus in April, leaders of some religious parties criticized him for calling Pakistan a “liberal country.” At a meeting held at the Haqqania madrasa in Khyber-Pakhtunkhwa, they even called on the Supreme Court to “take suo motu action on the prime minister’s statement.” Maulana Samiul Haq fulminated that “the slogan of a liberal Pakistan is a violation of the ideology of Pakistan.”

Nawaz Sharif is showing moral backbone—even if as political stratagem—in a country where his biggest rival, popular leader Imran Khan, has abjectly apologized to clerics over unintended blasphemy, and has approved funds for extremist madrassas as appeasement. His other rival, Asif Ali Zardari of the Pakistan Peoples Party, too beat a hasty retreat from his own party’s legislation to protect the Hindu community in Sindh after religious parties condemned it. It may be little more than an empty gesture, but the prime minister’s policy of tolerance is laudable. The isolated moderate Pakistani who cares for his country’s harassed denizens can take heart from this normalization of minorities in a land where they are all too often demonized.