Home Latest News Liberating the ‘No Go’ Zones of Karachi

Liberating the ‘No Go’ Zones of Karachi 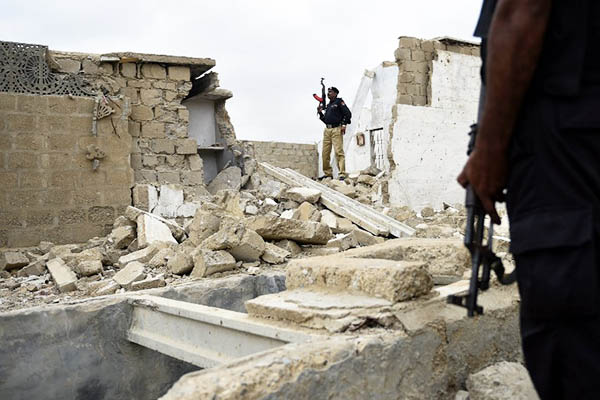 Police and paramilitary take on the Taliban in Pakistan’s largest city.

With a machine-gun in the back seat, his foot on the accelerator and wearing Top Gun style sunglasses, Azfar Mahesar pushes deeper into the heart of one of Karachi’s ‘Talibanized’ areas. “This used to be a war zone, but we have liberated it,” says the slightly chubby policeman with pride as his vehicle races through the city of 20 million, where Afghan intelligence says former Taliban leader Mullah Omar made his home in 2013.

Over the past few years, one word has been on everyone’s lips here: “Talibanization.” If the remote mountains that straddle the Pakistan and Afghanistan border have been the militant group’s playground, Karachi, Pakistan’s economic hub on the Arabian Sea, has been the insurgents’ hideout and cash-cow.

The Taliban dug deep into areas populated by ethnic Pashtuns, creating virtual “no-go zones” and terrorizing the local population with extortion and kidnappings for ransom to provide funding for their mujahideen.

But, according to Pakistani officials, that has all changed now.

“Talibanization in Karachi has died down,” says Mahesar, a former soldier turned senior police officer in the most dangerous, western part of the city. “I can say very confidently 70 to 80 percent [are purged]. There are a few remnants in Karachi but they are not as capable of coming back with the efficiency that they had a year or so ago,” he adds.

Today, policemen wearing flak jackets are advancing deep into the bowels of one of the remaining “no-go zones,” through dug-up streets and up rocky hills that mark the city’s western edge. “This was a local Taliban HQ,” one says as he stands before a pulverized hovel.

The Tehreek-e-Taliban Pakistan has been this country’s public enemy number one since its formation in 2007. Last December, the group carried out its deadliest attack ever, on a school in Peshawar, killing more than 150 people, mainly children. The TTP called it revenge for a military operation being carried out in North Waziristan, the epicenter of their jihadist movement and a sanctuary for Al Qaeda fighters along the Afghan border.

In response, the government gave the police and paramilitaries permission to lay siege to Talibanized areas, killing hundreds of suspected insurgents, without worrying much about due process. “Peshawar opened the world’s eyes. We had to act, even if it meant killing a thousand civilians,” says one policeman on the mission.

All this occurred as the military made gains in North Waziristan, from where the Taliban of Karachi received orders. “The disconnection between Karachi and Miranshah [capital of North Waziristan] has helped law enforcers to keep the Pashtun parts of the city safe and clear of the militancy,” said Zia Ur-Rehman, an expert on security in Karachi.

Taliban fighters instead sought refuge in neighboring Afghanistan, and Pakistan is now facing its lowest levels of terrorist violence in almost a decade.

In the Manghophir district of Karachi, residents now say business is picking up. Extortion and racketeering by the Taliban—or criminals posing as them—is now almost a thing of the past.

“God be thanked that the Taliban have gone. People were scared, they wouldn’t go out to the markets,” says elderly Fatima in front of the shrine of the Sufi Saint Pir Haji Mangho, which serves as a barometer of jihadist presence.

Mystic and moderate Sufism were once the predominant forms of Islam practiced by the Muslims of Pakistan, but the sect is seen as heretical by the hardline Taliban. This mausoleum, which was last attacked by Islamists in 2014, is guarded by crocodiles swimming in a green pond.

When the Taliban controlled the area, “the crocodiles barely got to eat,” says their guardian Khalifa Sajjad. “Now the followers have come back, and are giving their offerings of meat.”

In the hardscrabble Metroville district, where children bounce on a trampoline that has seen better days, Abdul Razzaq Khan, chief of the Jamaat-e-Islami political party in west Karachi, hails the anti-Taliban operation. “God knows where they’ve gone. They’re maybe hiding out here, or they’ve returned to where they came from, that’s an unanswered question,” he says, though he still believes criminals posing as Taliban were a bigger threat than the group themselves.

But for Rauf Khan, a member of the secular Pashtun ANP party, who last April survived the latest of several attempts on his life by the Islamists, there is no doubt things have changed drastically. “Now we are mentally liberated. It somehow hasn’t felt this way in 15 to 20 years,” he said. “Yesterday, I went to the cinema and came home late. I haven’t done that in years.”