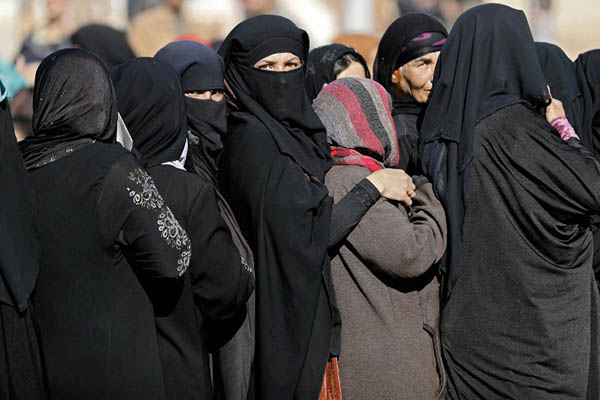 To celebrate her wedding in Mosul, Shaimaa covered herself in black to hide her dress and make-up from the jihadists on her way to the groom’s house. During the more than two years they spent under the control of the Islamic State group, many residents of the Iraqi city often defied the strict rules of the “caliphate” in the secrecy of their homes.

Shaimaa, 20, married Ali, 24, four months ago. In the Hasansham displacement camp where they now live with thousands of other people who fled their homes since Iraqi forces launched a broad offensive to retake Mosul in mid-October, they recounted their big day.

“I put on a white wedding dress, I did my make-up and hairdo and then disappeared under a black niqab and a long abaya to go from our house to my husband’s,” the young lady said. “When we reached the house, we locked the doors and turned on the generator so the noise would cover the music. The women were able to party while the men stayed outside,” her husband said.

That celebration was in violation of several rules enforced by the jihadists, who banned music, smoking and checked that no men were shaving and no women showing their faces. “I never thought my wedding party would be like that, I really wanted to wear a suit and shave, I wanted my friends to share our joy and I wanted to parade around town with my wife in a convoy,” Ali said. “The wedding was quick, we thought about going for a ride in town but eventually we were too scared to do anything,” she said.

A picture of their clandestine wedding, which shows Shaimaa wearing a white dress and putting her hands around her smiling husband’s face, survived the fighting and chaos that came when they fled. “I had a printing shop so I locked myself in, pulled the shutter down and printed the photo because such photos are forbidden,” he said.

He sat on a mattress with his wife in front of their tent with former neighbors who also fled last month, including 23-year-old Samiha, who remembered having to keep her voice down during the stealthy wedding party. She said she used to put earphones on to listen to music she had downloaded to her phone’s memory card but mobiles were tightly controlled under I.S. and simply owning a SIM card was punishable. Samiha said she used to hide her phone’s memory card and SIM card inside a curtain railing.

Communication with relatives living outside the “caliphate” I.S. proclaimed over parts of Iraq and Syria in June 2014 was complicated and perilous. Somebody had to stand guard outside the front door while she made a call, usually only a few quick words: “How are you? Good. Goodbye.”

If an I.S. patrol showed up and searched the house, they would hide mobiles in large bags of flour or rice, said Alia, a 40-year-old displaced woman who now lives in the neighboring camp of Khazer.

Most of the people AFP interviewed refused to be photographed or give their full names, out of fear for relatives still living in I.S.-held parts of Mosul. In their efforts to cut off their denizens from the rest of the world, the jihadists also banned satellite dishes and some residents had to pull off risky tricks to watch television.

“When the jihadists came to take my dish, I gave them an old one and hid the other two,” said Adnan, a 46-year-old who also ended up in Hasansham. “Every evening I would go to the roof to set up my dish and watch programs on TV for about three hours,” he said. “I would smoke in secret, play dominos in secret, use my mobile in secret,” said Hala, a 35-year-old woman living in Khazer, who explained she would hide her SIM card in her bra. “Everything was secret.”