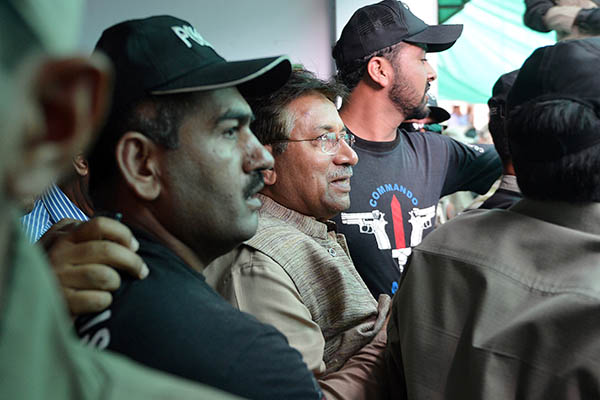 Pakistan’s former president is working on his second book.

At the end of a quiet lane snaking through the Islamabad suburb of Chak Shahzad, a terracotta-colored house stands amid spreading orchards and fields of wheat. It would be a restful, bucolic scene were it not for the army of 300 policemen, paramilitaries, soldiers, snipers, and antiterrorist officers on hand to guard the resident: the former leader of the world’s only Islamic nuclear power, Pervez Musharraf.

Musharraf, Pakistan’s former president and Army chief, still under house arrest, is spending his time writing his second book, reading, and working out each day.

The former general, who ruled from 1999-2008 after deposing an elected government in a popularly-hailed and bloodless coup, returned to Pakistan after years of self-imposed exile in March. He came vowing to stand in the general elections and “save” Pakistan, but his arrival restarted a barrage of legal cases relating to his time in power. The Chak Shahzad house was declared a “sub-jail” by a court in April, and he has lived there in detention since, as the cases against him grind through Pakistan’s sclerotic judicial system.

As the man who allied his country with Washington in its “war on terror” after the 9/11 attacks, Musharraf is in danger from Islamist militants who have vowed to kill him. So his prison and refuge is the house he commissioned back in 2006, at the height of his power, which was still under construction when he was forced from power and into exile. “The house was 95 percent finished before he left, but the first time he spent a night in the house was after he came back this year,” said Hammad Husain, the architect.

Inside the house, the walls tell the story of Musharraf’s career—photos that form a who’s who of world leaders, the swords and guns one might expect of a military man, a piece of fabric from the cloth of the Kaaba given by the Saudi king.

Aides say Musharraf, 70, is keeping his body in shape with 75-minute workouts every morning and his mind sharp with reading and writing. “He is writing a second book. He has written substantially but there is still work to be done,” his official spokesman Raza Bokhari said. The new volume will follow on from his first book, 2006’s In the Line of Fire. “It is picking up from 2007 onward, from the peak of his popularity to his downfall to life in self-imposed exile and then to the formation of a political party and his return to Pakistan.”

The former president lives with his bodyguards and aides in the 1,100 square-meter house, run under the auspices of the tough Adiala Jail in Rawalpindi. “His food is not prepared in prison, but on the premises for security reasons,” a prison source said.

To see him, his family and friends must get permission from the authorities, which can take up to a week. Close family members have visited him since his house arrest began, but they are forced to spend most of their time abroad. His wife, Sehba, is in Dubai caring for her mother-in-law. His son, Bilal, has long been based in the U.S., and his daughter, Ayla, had to leave Karachi this summer after terrorists threatened to kill her and her two daughters.

There have been rumors for months of a possible deal to let Musharraf go back into exile in order to avoid a clash between the newly-elected government, which is led by the man Musharraf deposed in 1999, and the Army, which is keen to avoid seeing one of its own further humiliated. “He is in good spirits, he’s a strong person,” said an aide. “Though he is a little disappointed in the judicial system in Pakistan.”