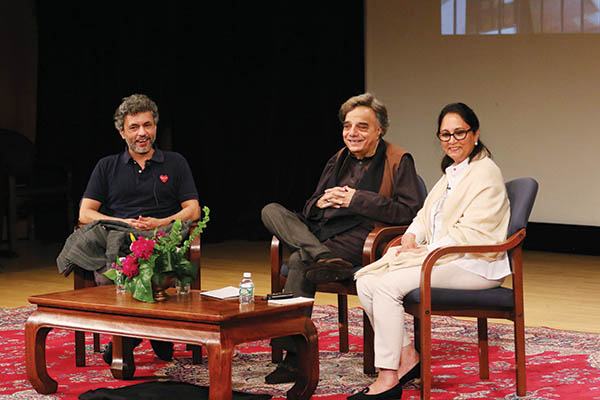 Nur un ala nur, light upon light, resonates through the Ayat al-Nur as a stirring evocation of the ethereal light of the heavens and of the earth.

Voiced by Ayesha Jalal to mark the start of her keynote address at the third iteration of the Lahore Literary Festival in New York, the verse encompassed within its layers of meaning the essence of dialogues that defined the festival. Found within the Surah al-Nur, the Ayat al-Nur is one of the most literary verses in the holy Quran. Aesthetically constructed metaphors, which have inspired wandering scholars from Ibn Sina to al-Razi, complement the intermingling of literature and cross-cultural discourses that characterize LLF’s sojourn in the United States.

Jalal did not invoke nur un ala nur for its mysticism or out of a sense of misled nostalgia. At a time when large swathes of the non-Western world have been increasingly characterized as inherently incompatible with Western liberal values, she mobilized the verse and its subsequent influences on movements like Sir Syed Ahmed Khan’s roshan khayali to make a powerful political argument for the acknowledgement of a familiar liberalism within Islam. The fusing of art and politics, a renegotiation of the past that opens the door for progressive reimagining of our futures, was therefore the hallmark of LLF New York. Across panels on the transformative powers of fiction to debates on the global dynamics of the strife in Afghanistan, there was a growing understanding of the importance of culture within conversations around South Asia and the world at large.

That these conversations remain integral not only to debates around Pakistan but around South Asia as a whole is crucial. For someone born on the other side of the border, what transpired at the Asia Society was not simply a literary festival but rather an insight into the dynamic cultural production of a country I may never be able to go back to. “There’s nothing like the free flight of imagination and ideas,” Ambassador Maleeha Lodhi exclaimed in her opening remarks. Amidst deteriorating relations between India and Pakistan, which have seen historic lows in people-to-people contact, the very existence of the Lahore Literary Festival in New York was a symbolic act of resistance against tenuous borders that keep these ideas apart. “The world is too far until it’s too close,” exclaimed author Kiran Desai over the course of her panel on the futures of fiction in South Asia. Only in New York could worlds come close enough for her to discuss fiction with Pakistani-born Sabyn Javeri, for flights of imagination on the future of Urdu between Saeed Naqvi and Tahira Naqvi.

Discussions at the festival often produced valuable insights that retain their significance, both for Pakistan and the region at large, even beyond its conclusion. Amidst the growing demonization of the Mughals in India, for instance, an evocation of the era’s syncretic traditions weaved into the panel on “Lahore as Palimpsest” serve as a reminder of the need to rework traditions while borrowing the ethos upon which they were crafted. Simultaneously, the panel’s push for feminist understanding of art that gives women the space to reclaim their own narratives remains more important than ever in the face of growing conversations around the rampant erasure of women’s labor across South Asia. During a discussion on Pakistan at 70, Raza Rumi’s grim remarks about never hearing founder Muhammad Ali Jinnah’s famous inaugural speech until after he graduated from college begged the question: will Nehru’s iconic “at the stroke of the midnight hour” be similarly erased from history books in a rapidly changing India?

Despite parallels being drawn between debates in Pakistan and across the region, the festival avoided the trap of becoming yet another forum for mere regional stability and cooperation. Beyond an emphasis on the importance of engaging with diverse perspectives on issues integral to Pakistani interests, including conversations on Afghanistan and increasing cooperation with China, there remained a commitment to establishing Lahore as a global cultural hub. With award-winning architect Nayyar Ali Dada in conversation with conservationist Tanvir Hasan, the creator of some of Lahore’s most iconic buildings was put tête-à-tête with those responsible for protecting its future. Inspiring inheritors of the city and its legacy were also showcased, with contemporary artist Waqas Khan showcasing his exquisite minimalist interpretations of Sufi heritage. The festival—politically charged yet not political, local yet global—played host to a unique hotbed of innovative collaborations, which have become increasingly difficult in traditional cultural spaces.

“Pakistan will fully come of age when there is a thorough decolonization of the mind, when we can go beyond the thinking that has been bestowed upon us by colonial masters,” said historian Jalal as she concluded her remarks for the evening. As Pakistan enters a heady period of transitions, with general elections due for July 25, events like the Lahore Literary Festival will remain more important than ever in ensuring that critical examinations of art, culture, and politics shape progressive change. The real challenge ahead for LLF founder and CEO Razi Ahmed is to break these colonial knowledge structures and take LLF beyond London and New York, from Cairo to Buenos Aires, to make Lahore a truly global force to reckon with in the years to come.

Gawande is the Director of the Dara Shikoh Fellowship, an interdisciplinary artistic residency based in Srinagar

The transformation of the Pakistani mind in the post-Zia era is still the elephant in the room for many intellectuals. “Pakistan will fully come of age when there is a thorough decolonization of the mind,….” Strange, Ayesha Jalal side stepped the toxicity in the Pakistani mind that Talibanization brought in its wake. Only de-Talibanization can ensure the return of sanity. It is only after achieving that can we think of coming of age.