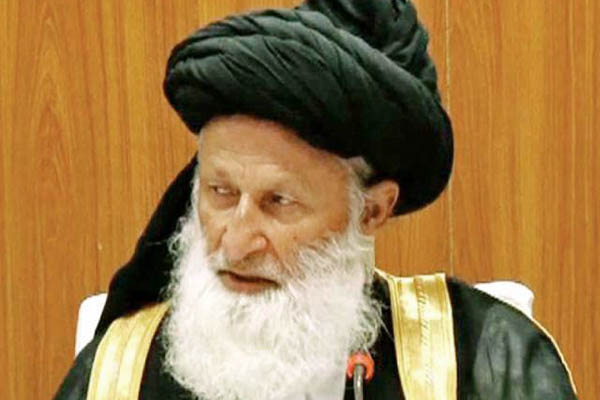 Chairman of the Council for Islamic Ideology, Maulana Muhammad Khan Sheerani, has announced the council’s own bill for the protection of women after rejecting the Punjab government’s Protection of Women against Violence Act, 2015, terming it un-Islamic. It says that a husband can “lightly” beat up his wife if she is disobedient. It doesn’t say who will adjudicate this “disobedience” if not the husband himself.

Sheerani’s bill—which the council plans to forward to the Punjab Assembly where it will likely be ignored or rejected outright—has shocked many, including some religious leaders. Pakistan Peoples Party leader Bilawal Bhutto Zardari reacted by saying that the clerics responsible for the council’s bill should be subjected to permissible “light beating.” Punjab Law Minister Rana Sanaullah, who supported the passage of the Protection of Women against Violence Act, rhetorically asked who would be on hand to decide if the beating is light and added “if someone strikes the head of a cleric with 20 shoes, will it be light beating?” Human-rights lawyer Asma Jahangir said the wife is not a slave that she can be beaten up.

Of course, there is more “protection” in the bill: no entertainment such as theater and cinema where men and women mix; no state functions where women go around shaking hands with men, etc. There is the problematic issue, too, of women “covering” themselves or becoming prime ministers of the country. By inference, if she is not allowed to meet men, no Pakistani woman can be head of the government while shut up at home, possibly being beaten “lightly” by her husband.

The fact is that allowing the husband to beat up his wife, lightly or otherwise, goes against the Constitution, which forbids any “discrimination” on the basis of sex or religion. How can a man legitimize violence against a woman by himself? But Sheerani’s council has based its wording—reportedly at the urging of a member affiliated with the Jamiat Ulema-e-Islam (Fazl)—of the proposed law on the text of the Quran. Pakistan’s ideological inspiration, Allama Iqbal, challenged the clergy in the 1920s by suggesting in his Sixth Lecture that Islamic punishments would have to be “re-reinterpreted” in modern times. His words were prophetic. The punishment of cutting hands for theft is on the statute book but no thief has had his hand cut in Pakistan so far. The same applies to “stoning to death” which is law despite not being Quranic.

The council’s bill, despite its non-binding status, sets back efforts made so far in Pakistan to prevent domestic violence, which mostly means the husband brutalizing his wife, at times in front of his children.

This mor*n needs to be behind bar for inciting violence. So where is the silent majority? Where is the feminist rights movement in Pakistan. No outcry. Have they given up?. God bless them.

why dont we lightly bash the mullahs.

NOT IDEALOGY BUT CUSTOMS.CULTURE./PRACTICE ETC AND THESE ARE UNRELATED TO ISLAM