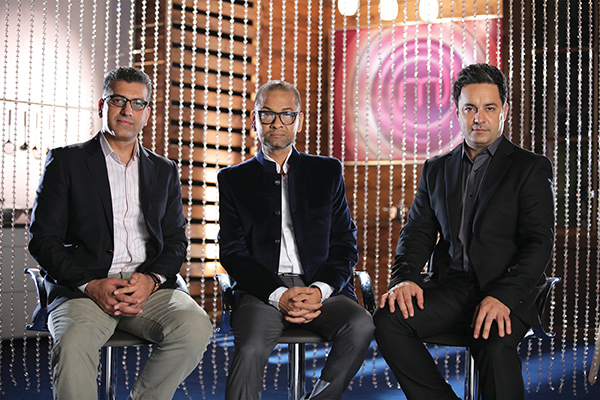 Mehboob Khan auditioned but didn’t hear back from the producers. After almost a year’s wait, the 45-year-old restaurateur, author, and 10-year cooking show veteran settled on returning to the Pakistani airwaves by hosting a show on a local cooking channel. But before he could sign the contract, the call he had given up on finally came.

“‘You’re willing to give up our three-year agreement and accept one that is only for six months?’” Khan recalls the Pakistani channel’s producers as saying. “I told them I had to do this; I had to be on MasterChef.”

When it comes to culinary drama, there’s nothing quite as delicious as the British reality TV hit. On May 3, the Pakistani edition—with Khan as cohost—debuted on Urdu1. MasterChef Pakistan, with its high production values and brisk ratings, is set to be a game changer for Pakistani food television and for the Dubai-based channel that previously shook up TV viewing in Pakistan by airing Turkish soaps.

Over the next three months and two hour-long episodes each week, Pakistani viewers will see some 100 contestants compete for the first MasterChef Pakistan title, a book deal, and Rs. 5 million. (The MasterChef fame is lucrative. Thomasina Miers, winner of the 2005 MasterChef U.K., runs a chain of Mexican restaurants, authored four cookbooks, and hosted her own TV series.)

The contestants, who will be whittled down to 16 finalists in the first few episodes, were chosen by the show’s three judges—Khan, TV personality and chef Zakir Qureshi, and chef Khurram Awan of Mövenpick Hotels—from open auditions in Lahore, Karachi, and Islamabad.

“The response has been tremendous,” says Faraz Ansari, the trailblazing CEO of Urdu1. “We had aspirants come in from the remotest of areas waiting to audition for weeks.” Some of those who auditioned were businessmen, some were from the tribal belt, and the majority of them prepared non-Pakistani dishes for the judges.

Urdu1 struck a deal with the Shine Group for MasterChef Pakistan last year. Several million dollars later, the show known to pack a punch—its tagline is “Cooking doesn’t get tougher than this”—has finally been served. This will be the first show to make Pakistani food look good. “I don’t think such an expensive and enormous set has ever been put up in Pakistan,” Ansari tells Newsweek. (Urdu1 is also localizing U.S. ratings juggernaut The Voice for Pakistan.)

Like other licensed editions of reality TV, MasterChef Pakistan benefits from the experience of the licensor. Shine has been doing MasterChef for 24 years in Britain and abroad. “[We] have been in regular liaison with the Pakistan team since the early stages and will continue to be for the rest of the run,” says Shine.

A key ingredient of MasterChef, and what makes it a must-watch, are the judges. The Simon Cowell of the three is the bespectacled Qureshi. But unlike Cowell or the unnecessarily caustic Pakistan Idol judges, the three wise men of MasterChef are generally encouraging. (They went easy on a contestant who accidentally cooked tissue paper in her dish.) For cohost Khan, the yearlong wait was well worth it. “In all my years in the kitchen, I’ve never been this energetic,” he says. If the first few episodes are anything to go by, MasterChef Pakistan will have viewers coming back for more helpings.