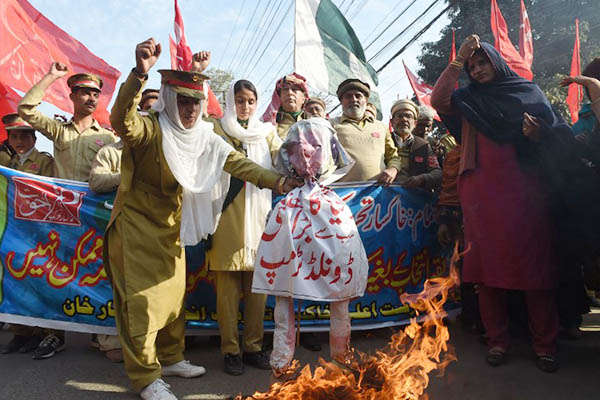 Washington’s freeze on billions in military assistance to Pakistan will have limited impact, thanks to its friendship with China and diminishing importance of aid to the economy, observers say—but there could be trouble if the U.S. calls in its debts.

Exasperated by what it considers Islamabad’s neglect in cracking down on militancy, Donald Trump’s administration last week announced a suspension of the aid, which also goes toward Afghanistan coalition funding. “They give safe haven to the terrorists we hunt in Afghanistan, with little help. No more!” President Donald Trump tweeted on New Year’s Day.

A senior official told AFP that up to $2 billion of equipment and funding was at stake. However, with U.S. aid declining significantly in recent years, the economy improving and Beijing just a phone call away, sources told AFP the negative effects would be “marginal” in the short to medium term.

“International aid is not big in comparison with the [size of the] country’s economy,” one Islamabad-based diplomat said. “Means of pressure are limited.”

Former finance minister Hafeez Pasha says after the U.S. invasion of Afghanistan in 2001, aid increased substantially, approaching $3-4 billion annually at its peak in 2010. “From there onwards, it’s been declining very sharply. Last year, it was around $750 million,” he said, a figure that when compared with the economy “is not a lot.”

But officials in Washington have also hinted to AFP that they have other cards to play—such as calling in vital IMF loans. Pakistan’s economy is currently stable and growing, says senior World Bank economist Muhammad Waheed. But it is also financed through the World Bank, the International Monetary Fund and the Asian Development Bank—all institutions to which Washington is a major creditor.

“There are structural issues like low tax revenues and growing trade deficit, which government needs to tackle,” Waheed added, warning of a looming balance of payments crisis.

Pakistan’s foreign exchange reserves are sharply down, forcing the country to borrow if it wants to continue to grow, analysts have said. In December, Islamabad raised $2.5 billion in international bonds, a transaction described as “successful” by Waheed.

But Washington’s power gives it an indirect weapon to wield over Pakistan, warned security analyst Rahimullah Yousafzai. “It can use its influence in the U.N. Security Council, IMF, World Bank, Asian Development Bank,” he said.

The Washington-based IMF has bailed out Pakistan before, with an $11.3 billion loan package in 2008 to stave off a balance of payments crisis in a deal Islamabad abandoned in 2011. The country received a second $6.7 billion IMF bailout package in 2013.

“Pakistan needs the support of the United States… because the U.S. is a major shareholder of those organizations,” agreed Ashfaque Hasan, an economist on Pakistan’s economic advisory council. He recalled that in 1998 the IMF imposed a $20 million fine on Pakistan, hit by a credit freeze after its nuclear tests.

But weeks after the September 11 attacks on the U.S., the IMF released $135 million for Pakistan as it aligned itself as a major ally of Washington ahead of the U.S. invasion of Afghanistan. Now, however, Pakistani officials appear to believe they also have their long and growing friendship with China to play.

“If the U.S. starts to bully, blame, threaten, we have other options,” says Senator Mushahid Hussain Sayed, referring to China, which rushed to defend Pakistan’s track record on militancy after the U.S. announcement.

Questions remain over how much Beijing, which is already investing some $60 billion in Pakistani infrastructure projects and which has a horror of Islamist militancy on its borders, would be willing to prop up its “all-weather” friend. But Sayed was bullish. Suspending aid, he said, is “a failed formula.”