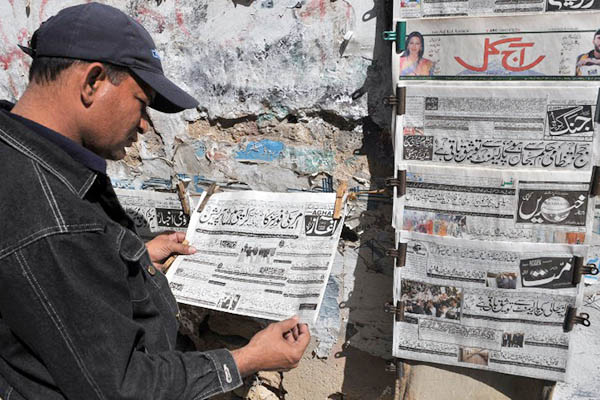 A daily newspaper has vented against Pakistan’s “weird obsession” with the English language after Pakistan Peoples Party Chairman Bilawal Bhutto Zardari was praised at home for his articulate defense of Pakistan “in English” during an interview with the Indian press at the World Economic Forum at Davos in Switzerland. The anonymous “corrective” also complained about the praise another PPP politician, ex-foreign minister Hina Rabbani Khar, garnered for her TV discussion with CNN’s Christiane Amanpour. It additionally noted that Bilawal was not praised for his Urdu interview at Davos and hinted at a willful denigration of Urdu by our English-enslaved upper classes.

Urdu is Pakistan’s national language and gained more popularity after 1947 than anytime earlier in history. The sheer volume of Urdu prose produced in Pakistan has shaken it from its past status of an idiom more suited to poetry than prose. English, however, has remained the language of knowledge just as Arabic was once upon a time. (Omar Khayyam wrote his famous verse in Persian but his mathematics was in Arabic.) Pakistani nationalism, however, is often expressed by attaching “servility” to the learning of English which continues to be compulsory in Urdu-medium schools. Leaders complain of “two nations” being produced in Pakistan by English-medium schools in the private sector, as if banning English will produce “one nation” in the midst of the regional identity-clashes brought about by a malfunctioning state.

There was a time when Pakistan could have got rid of English and probably prospered, but today when the job market is global and any bright young man can make his mark in any part of the world, English is helpful. Apart from its historically rational-sequential discourse—which contrasts with the emotive power of Urdu, which our bad-mouthing politicians use for insulting rivals—it brings technological knowledge to us without the delay of translation. Hating English will not bind us together. If we don’t give up the foul Urdu we used in political discourse, Urdu might become the instrument of our fall.

Why the hell Pakistanis are obsessed with stupid ideas such as expressed in this awful article which I wasted my time to read. So what’s the big deal if Bilawal spoke English? Bunch of idiots like this writer should wake up and educate the pro Wahabi fanatic society and encourage parents to send their kids to regular schools not Madrassa and force the corrupt elite to spread modern education aggressively.