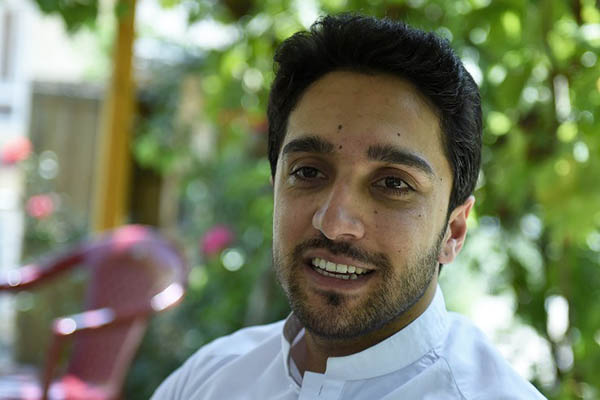 Ahmad Massoud says he has returned to Afghanistan after completing his studies in London to work for his countrymen.

His first public appearance was at the tender age of 12, a tiny figure walking, head down in grief, beside his legendary father’s coffin. Fifteen years later, Ahmad Massoud, son of Ahmad Shah Massoud—the charismatic, French-speaking mujahideen commander who held the Soviets at bay and was Afghanistan’s last bulwark against the Taliban—is ready to step into the spotlight once more.

When he arrives unannounced at his father’s tomb in an immaculate white shalwar kameez, it is as though he were an apparition: a woman in a burqa falls to her knees and wails, while an elderly man in a faded turban wipes his eyes.

The young Ahmad has the same deep brown eyes as his father, whose portrait—by turns pensive, serious, laughing—adorns every wall, shop, corner of every road in the valley he held undefeated.

Dubbed the “Lion of Panjshir,” Massoud the elder was commander of a mujahedeen force that battered one of the world’s two superpowers into submission, and later of the Northern Alliance formed to fight the Taliban. He is a national hero, though memories of him in Kabul are tainted by destruction in the capital during the civil war of the 1990s.

But in the famed Panjshir Valley, three hours north of the city, devotion is without nuance.

Massoud was killed on Sept. 9, 2001, by two fake reporters sent by Al Qaeda, the terrorist organization’s gift to its hosts in Afghanistan, the Taliban. It was just two days before its attacks on the United States.

Fifteen years on Ahmad recounts his father’s last days to AFP, surrounded by flowers in the family’s garden, their brightness set off by the camel-colored mountains of the valley.

Coming face to face with his father’s body was a profound shock for a child who, despite war’s devastation, had never seen a corpse before. “Everything changed,” he says. “From that moment I realized I had to change everything I learned so far, and at the age of 12 I had to be another person.”

All of Panjshir attended the commander’s funeral amid chaos: by then the 9/11 attacks had taken place, and Afghanistan—still under Taliban rule—knew it would be war. When Ahmad appeared, crowds surged behind him. The child walked with his head down, his hands clasped behind his back, as his father had done. His clear voice moved mourners to tears as he echoed Massoud’s call for independence.

It was not until years later that he understood the true burden of his inheritance. “I was in love with astronomy,” he told AFP. “I was full of energy, I was on fire.”

But one of his father’s friends told him: “We expect you to work on a solution for the Afghan people, and I don’t think you will find it on another planet.”

His passion doused, he made instead for London, King’s College to study international relations. Now 27, Ahmad is set to complete his schooling and return home. It was all for Afghanistan, he says.

“I studied to come back. I have no dual nationalities, I have no property outside Afghanistan, I have nothing… I am completely devoted.”

Afghanistan in 2016 remains insecure. “This government has kept none of its promises,” Ahmad says.

Facing a resurgent Taliban, Washington renewed its military commitments to Kabul in June, and Ahmad expressed his gratitude for international support even as he remained critical of U.S. policies. “With the campaign of Iraq, they completely overlooked Afghanistan and they allowed a false shepherd … to be in charge,” he says, resulting in the mess of today.

He refused to name names. But the criticism appeared to target both current president Ashraf Ghani—who shares power in a fragile agreement negotiated by the U.S. with Massoud’s ally, Abdullah Abdullah—and Ghani’s predecessor, Hamid Karzai.

Much of the pathos surrounding Ahmad Shah Massoud includes speculation about how Afghanistan would look today had he lived. “He did not want anyone to intervene in Afghanistan,” Ahmad says.

His father warned the world about bin Laden, he says, referring to a speech Massoud made to the European Parliament in the spring of 2001 calling for support for Afghanistan “to stand against this.” But the world did not listen, Ahmed says, and after 9/11 it was too late.

Fifteen years have passed, with billions of dollars spent, and thousands killed. Ahmad brands it all a ‘waste.’

“They killed my father in the name of Islam… They did not care that my father was a Muslim,” he says. “They… just hijacked Islam—they do not believe or understand Islam. And I can strongly say, they are not Muslim. They are simply terrorists.”

So does he see himself taking up a political role on the national stage—M.P., minister, president—as did his warrior father, who was defense minister after driving the Soviets out? “Why not,” he says—if it is the will of the people. If not, “I become a teacher.”

At his father’s tomb, perched above the valley near rusting Soviet tanks, Ahmad greets the children of admirers and poses for selfies. How does he describe the response? “Love,” he says.