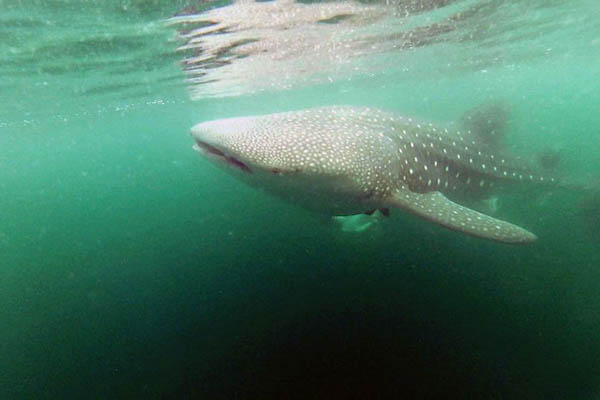 Lions, chimpanzees, giraffes, leopards and a wide variety of sharks received added protection at a U.N. wildlife conference in the Philippines, organizers said on Saturday.

Some 34 endangered species were selected to receive heightened conservation efforts at the Conservation of Migratory Species (CMS) conference that just concluded in Manila.

Protecting migratory species poses particular difficulties since they cross borders, including possibly moving to countries with less stringent wildlife protection systems, said Bradnee Chambers, CMS executive secretary. “If the species is moving around all of these countries, everybody has to pitch in,” he said at the end of the weeklong conference.

Lions, leopards and chimpanzees were singled out as needing more conservation work. The chimpanzee in particular is at risk as their numbers have dropped sharply in recent years due to habitat loss, the organizers said.

The giraffe, which is in decline throughout Africa with fewer than 90,000 animals left in the wild, was also listed.

All four of these African mammals were approved by a “wide majority” for additional protection measures, a CMS statement noted. “Everybody in this room can identify with these animals,” Chambers remarked.

Less popular species also received additional protection, including 10 species of vultures. Chambers said these birds provided a vital service by cleaning out carcasses, which prevents the spread of diseases like anthrax and rabies.

Also listed was the whale shark, the largest fish in the world. Host country the Philippines had lobbied for this creature, which has become a major tourist attraction. Three other shark species—the angelshark, the dusky shark and the blue shark—were also listed along with three species of rays, the organizers said.

Activist charity group the Pew Charitable Trusts praised the CMS action, saying it was crucial to save these marine animals. “In some regions, the newly protected shark species have experienced population declines of 50 percent or more,” Pew shark conservation expert KerriLynn Miller said in a statement.

Also listed was the Gobi Bear, which lives in the wild regions shared by Mongolia and China. Only 45 specimens remain in the wild, the organizers said.

One of the breakthroughs of the meeting was the adoption of a “compliance review mechanism,” to check if member countries respect the protective lists, the organizers said.

Pew international conservation expert Max Bello said that even though the CMS lists did not provide for sanctions, many member countries still complied with them. “It does work. It needs more [authority] for sure. But you can use it. It’s actually a very good tool,” he told AFP. “A year or two ago, I was helping some group in Peru in the coast of the South Pacific and we used CMS to convince the government of Peru to protect the giant mantas that come from Ecuador every year,” he recalled.

More than 120 states are party to the CMS, but this does not include China and many other Asian countries. “We’re trying to work to bring China onboard as a member of the convention. We have been engaging them and they are actually doing quite a bit,” Chambers told reporters.

China had already made some progress, banning shark fin soup in official banquets and announcing a ban on ivory by the end of 2017, he said. “What it required is positive engagement with the country to see how to find solutions instead of just bashing the country and looking at the negative side.”