Home Latest News ‘Listen to Us’ 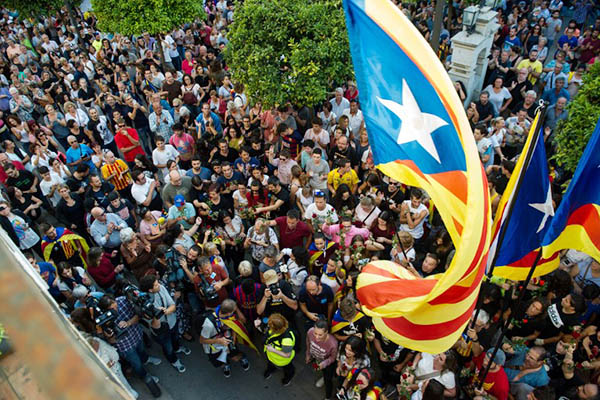 Catalans vow to continue mass protest until their demands are met

Gerard Mur’s heart sank as he watched Spain’s king address the nation on Tuesday at the end of a long day of protests in Barcelona against heavy-handed police action during a banned referendum on independence for Catalonia.

“He didn’t position himself even a little on the Catalan side,” said the 25-year-old unemployed journalist after King Felipe VI threw his weight behind efforts to fend off Catalan leaders’ bid for separation. “Not once did he mention the victims,” he added, alluding to Sunday’s violence. “I thought he would call for dialogue, that he would say that all sides sit and talk, but no.”

This feeling of rejection was echoed among others who listened to the speech on Tuesday after peaceful yet angry rallies in Barcelona, the Catalan capital, that saw 700,000 people—pro- and anti-independence, young and old—turn out.

“Occupation forces out,” they shouted in fury at police measures that marred Sunday’s referendum, which had been banned by Madrid and declared illegal by Spain’s Constitutional Court, but went ahead anyway.

Coinciding with a region-wide general strike, they also called on the E.U. to intervene in the clash between Catalan separatist leaders and Madrid. “Spain is this your democracy? E.U. we need you,” read one sign in a crowd of blue, red and yellow separatist flags. “Ashamed of you Europe,” another said, as a police helicopter flew overhead, drawing angry whistles.

“It’s a disgrace that must be denounced in Europe, they hit us when we were sitting down, I still have the trace of where they hit me with a baton on the leg and the image of the bloody face of grandmothers in my head,” said Miriam Lao, a 35-year-old company boss. “If Madrid doesn’t recognize Sunday’s referendum, then give us another. But listen to us,” she pleaded.

Madrid had repeatedly warned Catalan separatist leaders that they could not go ahead with the illegal referendum in a region deeply divided over independence, but they did so anyway. As people queued at polling stations, riot police moved in to prevent them from voting, in some cases hitting people with batons and shooting rubber bullets, injuring over 90 people according to regional authorities.

The Catalan government said 90 percent of the more than 2.2 million people who managed to cast their ballot voted for independence—but over half of eligible voters did not turn out in a vote branded a “farce” by Madrid.

At the protest, anger over what happened on Sunday had far eclipsed the traditional debate over independence. “What is important is that people are united—those who want independence and those who don’t—against what is happening,” said Rachael Moya, who said she personally did not want to split from Spain.

“Closed for revolution,” read a sign at the demonstration, while parents and children from a school used as a polling station on Sunday unrolled a giant banner that students had made. “Navas-Sagrera for peace and democracy,” read the banner with dozens of multi-colored little handprints.

Nearby, a group of friends wore black t-shirts with the sign “very fragile” pinned onto the back, in a dig at police. “You can’t stop the youth,” said Alfredo Vidal, the 68-year-old owner of a dry-cleaning shop, pointing to the hundreds of students marching slowly by. “I had never seen Catalans putting their hand on their heart during the Catalan hymn,” he went on. “But for about a month now, I’ve seen them do it, especially the young,” he said as an example of increasingly fervent feelings among supporters of Catalan independence since Madrid started cracking down on the planned vote.

“It’s a bummer because we’re only here for a few days. But it’s hard to say my vacation is more important than what is happening here,” said Karen Healey, 53, from Portland in the United States.

Carlos Cardello, a 57-year-old engineer, vowed that this huge swell of peaceful protest would not die down. “We will keep going until someone listens to us,” he said.