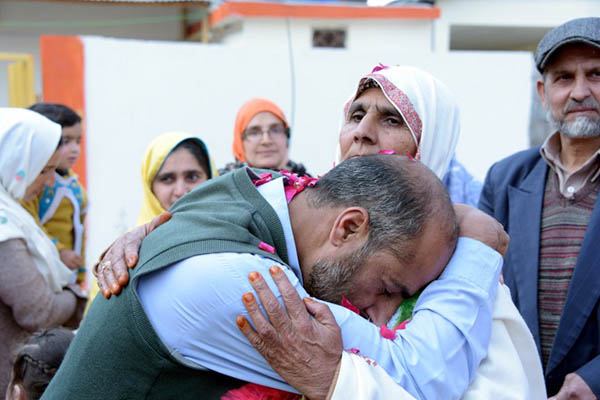 The hidden cost of the ongoing Kashmir conflict.

Muhammad Ashraf’s eyes fill with tears, overwhelmed by grief and joy all at once, as he recounts being reunited with his family 26 years after they were torn apart by insurgency in disputed Kashmir. “My son was 12 years old when we separated. Now my grandson is 16,” he told AFP of his odyssey to see his loved ones again, bittersweet for its brevity and because it lay bare how much he missed out on.

In 1990 Ashraf was serving with Indian security forces far from his family’s village, in Indian-administered Kashmir near Pakistani territory, as a violent insurgency against New Delhi gathered pace. By October that year, amid reports of mass detentions and widespread torture as authorities tried to crack down on militants, Ashraf’s family fled in fear.

Along with 20,000 other Indian-administered Kashmiris, they crossed the de facto border and sought refuge in Pakistan-administered territory. Ashraf was left behind. It was a week before word even reached him that they were gone, and little did his family realize it would be more than a quarter of a century before they embraced him again.

“The golden time of my life, which I should have spent with my family, is gone,” he told AFP.

Ashraf’s tale highlights the plight of thousands of refugee families divided by a conflict that stretches back as far as the bloody Partition of India in 1947, when the subcontinent shook off British rule. Kashmir is one of the world’s most dangerous flashpoints, bitterly split between nuclear rivals India and Pakistan but claimed in full by both. They have already fought two wars over the mountainous region, with no end to the dispute in sight.

Ashraf found himself trapped by his career as a soldier. “I thought if I quit my post I would be considered a traitor,” he said, adding he also feared repercussions for the one daughter who also remained in Indian-administered Kashmir. He was not allowed to visit Pakistani territory, while on active duty. But when he retired in 2006 he redoubled efforts to see his family again.

First Ashraf applied to use the Kashmir Bus Service, which was launched a year earlier to facilitate meetings between divided families. He tried five times in total—all in vain. Access to the service remains largely at the whim of authorities and is routinely disrupted during periods of high tensions.

He then decided to apply for a passport to allow him to cross the formal border further south in Punjab province, but the document took 10 years to procure. The reasons for the delay are unclear, but it is possible that as a former Indian soldier, authorities were not keen for him to travel to Pakistan.

The passport finally arrived in 2016—but it was too late for him to see his parents again, as they both died in Pakistani-administered Kashmir. His children’s weddings, the births of his grandchildren all took place there too—over the long years they were without him. He also missed a lifetime with his wife, Badar Un Nisa, who is now 62. “I wept during the weddings of all my children because I missed my husband,” she told AFP.

“My mother worked very hard,” Ashraf’s son Muhammad Asghar added. “It is very difficult for a woman to bring up her children without her husband’s support.”

When a ceasefire agreement was signed in 2003, authorities designated two spots on the Neelum River, which cuts through Indian- and Pakistani-administered Kashmir, where relatives on either side can wave to one another across the rushing waters.

Ashraf’s family describe catching a glimpse of him there once, at Eid, in 2006—16 years in to their separation. The river is just around 80 feet wide there, but with armed soldiers watching closely on either side, all the families can do is look.

For many, it only heightens the pain.

Ashraf Jan, 60, who is from the same village as Muhammad Ashraf—Karen in Indian-administered Kashmir—has also been separated from her family since 1990. She describes her heartbreak at seeing her son, Ashiq Hussain, across the Neelum River.

Seeing them again this February was like being “re-born,” she explained. But for her and Ashraf both the reunions are tinged with grief: their visas only lasted a month. They have sought extensions, and remain in Pakistan-administered Kashmir for now awaiting the Interior Ministry’s reply, but—eventually—they will have to return. If they surrender their Indian passports they could seek refugee status to remain in the camps in Pakistan-administered Kashmir—but, for Ashraf, that would mean leaving his other daughter behind, as well as his home and pension.

If he keeps his passport, he can visit again. But with tensions once again high between India and Pakistan, no permanent solution is yet in sight.

Ashraf’s desolate wife Nisa is distraught: “We have been very happy since my husband was with us, but these moments of happiness are brief. He has to go back.”