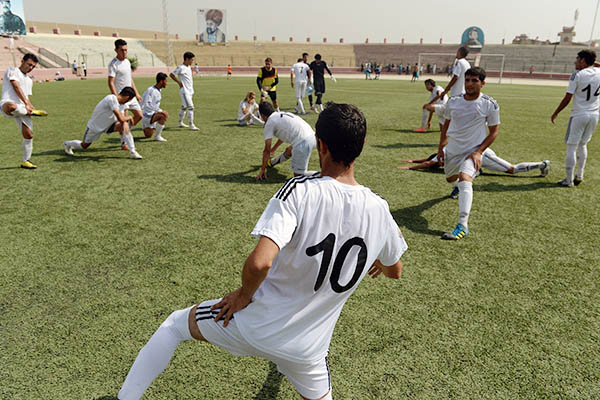 144 athletes get paid $9 a day and share a house for seven weeks while hoping to play for the national team.

Being signed by a premiership club was a dream come true for 19-year-old striker Emal Mangal, even if top-level football in Afghanistan means being paid $9 a day and living in the same house as 143 other players.

Mangal is a key member of De Abasin Sape, one of eight teams in the highly competitive second season of the Afghan Premier League (APL) in Kabul.

Matches are played over seven weeks in a new stadium, and players from regional teams across the country are provided with free accommodation and food at a sprawling mansion in the suburbs.

Such communal living is a far cry from the lifestyle of professional footballers in Europe, where 24-year-old Gareth Bale from Wales last week signed with Real Madrid for a pay packet reported to be worth more than $60,000 a day.

“We are here all together, eating and living and sleeping in the same place. It is great fun,” said Mangal, a third-year medical student standing outside his dormitory after morning training. “Everyone is friends in the house, but when we get on the pitch, that finishes and we are big rivals.”

Between six and eight teammates share each bedroom, sleeping in bunk beds and surrounded by piles of football shirts, socks, suitcases, and mobile phones blasting out Indian pop music.

They stack personal belongings and pots of green tea along window sills, hang sheets around beds to get some privacy and share one bathroom between about 10, as well as do all their own laundry.

But, under the beady eye of a supervisor, sweaty kit and bags of footballs are kept outside the bedrooms, and the house is surprisingly orderly considering its large community of young male residents.

“After two-hours practice every day, we are so tired that we just relax afterwards, talking or watching football from Spain or England on the television,” said Mangal, who scored in his team’s opening game on Friday. “We miss our families, so we call them by telephone often. My dad is so excited because the matches are on the television and he can see me play.”

The league is split into eight teams covering the whole country to give all Afghans a side to support, and it hopes to promote better ethnic ties after decades of warfare and conflict.

De Abasin Sape—Father of Rivers as the Indus River is known—is made up of the volatile southeastern provinces of Ghazni, Paktia, Paktika, Khost, Logar and Wardak. Kandahar and Helmand provinces, the heartland of a 12-year Taliban insurgency, are represented by De Maiwand Atalan—the Heroes of Maiwand, named after the 1880 Afghan battlefield victory over the British.

“We are all Pashtuns in our squad but we are friendly with the Tajik players from Herat, with Harzaras, with everyone,” said Mohammad Mohammadzai, 22, a primary school teacher from Kandahar who plays for Maiwand Atalan. “I have taken special leave without pay to play, and we get 500 Afghanis ($9) a day for being in the league. It is a very good tournament but I am away from home for two months which is too long.”

Mohammadzai—known to his friends as Zidane after the retired French star Zinedine Zidane—said that playing football offered a welcome distraction from the bombings and violence that are part of life in Afghanistan.

“Football as a job is not possible in this country, so this is a very good time for us,” he said. “Outside Kandahar city is still very dangerous for everyone. We have to hope for a better future.”

The APL, sponsored by mobile phone company Roshan, has attracted crowds of a few thousand to each match, and Tolo TV claimed an audience of 12 million for Afghanistan’s recent home victory over Pakistan.

But training is held at the Ghazi stadium where matches during the 1996-2001 Taliban regime featured half-time public executions with murderers shot, criminals hung from goalposts and thieves’ hands cut off.

Now, each morning, the Ghazi pitch instead echoes to the shouts of APL coaches as they drill their teams through complex practice routines and grueling fitness tests.

Back at the house, the high-spirited Oqaban Hindukush (Hindu Kush Eagles) break out into a dance, clapping and shouting to kill time before lunch is served outside on metal trays under a colorful awning.

On the floor above, team logos stuck onto doors show the way to rooms for the Herat-based Toofan Harirod, where players hone their skills on a PlayStation console game pitting Chelsea against Barcelona.

“We won the APL last year and hope to win again as we have the best players and the most experience,” said Mohammed Naqib Azadany, 24. “Of course, we all want to go on to play for the national team.”

As the players lounge around, wearing either replica football shirts or traditional robes, they often discuss whether any of them could break through into the millionaire ranks of the English, Spanish or German game.

But, after plenty of joking, the conclusions are realistic.

“I lost my job when a NGO pulled out of Afghanistan and the APL didn’t even give me free boots for this new season,” said Abdul Qayoum Sapand, 22, from Lashkar Gah in Helmand. “It will not be us, but perhaps in 50 years we can dream of seeing an Afghan play for Chelsea.”