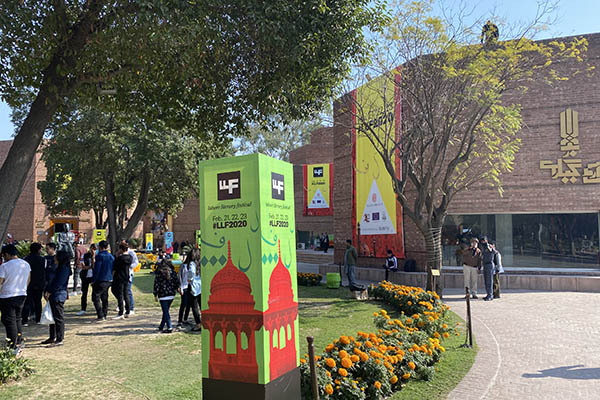 The 10th annual Lahore Literary Festival (LLF) will commence on Friday, March 18, 2022, at the Alhamra Art Center, Mall Road with over 100 delegates from Pakistan and abroad in 50 sessions over three days.

Last year’s LLF was a digital-only event due to coronavirus concerns. With life now returning to normal with the decline of the pandemic, the annual three-day event returns to Alhamra on Friday with an opening ceremony at 2:30 p.m. In addition to welcome addresses by the organizers, the opening ceremony would include short lectures on the Ottomans, contemporary Egypt, and an illustrated talk on Lahore by Marc David Baer, Ahdaf Soueif, and F.S. Aijazuddin, respectively. The first session would conclude with a Lifetime Achievement Awards Ceremony.

The first day will also feature an hour-long performance by Vanessa Muela, starting at 4 p.m.

The second day of LLF 2022 will commence at Lahore’s Bagh-i-Jinnah (Lawrence Gardens) at 10:30 a.m. with the unveiling of a permanent art installation by iconic artist Rasheed Araeen. Following this, the event will return to the halls of Alhamra from 12 p.m., featuring five parallel sessions throughout the day, ending at 6:45 p.m. Among the highlights are a session on global politics with former diplomat Maleeha Lodhi; a chat with London-based artist Osman Yousefzada; a discussion on children’s fiction featuring British novelist Roopa Farooki; a discussion between historian Ayesha Jalal and columnist Nadeem Farooq Paracha; an Urdu session on subverting boundaries through humor with Ali Aftab Saeed and Salman Shahid; and the launch of Dasht-e-Imkan with author Asghar Nadeem Syed.

In addition to the panels, the second day of LLF will also feature a dastangoi, an Urdu storytelling session, from 5:45 to 6:45 p.m. The day would conclude with a Qawwali recital, starting at 8 p.m., featuring the Sami Brothers.

The event will conclude with a mushaira and a Punjabi drama performance directed by Huma Safdar.

LLF’s tenth anniversary continues to be a celebratory exploration of Pakistan’s literary arts. The festival features artists, writers, and opinion leaders from around the world in thoughtful discussions on a variety of topics, both current and historical. Founded by Razi Ahmed in 2012, LLF aims to reclaim Lahore’s cultural significance and influence, and was a key factor in the Punjab capital being declared a ‘City of Literature’ by UNESCO in 2019.